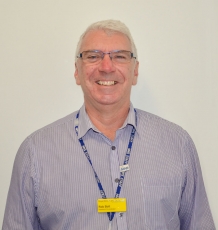 Rob spent over fifteen years working in banking and insurance filling many roles including Branch Manager and an eight year spell as Secretary/ Administrator of South West in Bloom, the Regional Britain in Bloom competition.

He joined the Royal Devon and Exeter NHS Foundation Trust in 2002 working in the out of hours Medical Records team and began working in the Clinical Research Facility in October 2009. Rob’s role as Research Co-ordinator is to provide administrative assistance to the CRF team where needed, and for the StartRight and TIGI diabetes research studies.