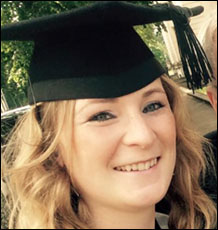 She is an MRC Case PhD student working within the Human Genetics of Complex Traits team within the College of Medicine and Health. Charli is working under the supervision of Professor Tim Frayling, Dr Asami Oguro-Ando and Audrey Chu (GSK). The main focus of her PhD project is to determine the role of common genetic variants for predicting the modulation of cardiovascular outcome. Her industrial sponsors are GSK, the pharmaceutical company. Charli has a keen interest in genomics and chronic diseases with a particular focus on cardiovascular diseases.

Outside of her PhD project, Charli enjoys running, paddleboarding, playing netball & cricket, experimenting in the kitchen, travelling and exploring the outside with her husky pup.

2012 - 2015: 1st class Hons BSc in Biochemistry at the University of Cardiff. Charli obtained 2 academic prizes in her final year for being the top student studying Biochemistry or Biology and for achieving the top marks in the Protein folding and structure module. She also achieved Merit awards during her 1st and 2nd year for outstanding achievements.

Charli's main research interests lie in human genetics and complex diseases which have been further consolidated during relevant modules during her undergraduate degree and Master's. She also has a key interest in drug discovery and patient care/impact where she likes to see research being translated into medical care and make a real difference to patient treatment. Despite coming from a wet-lab undergraduate project background, Charli thrived during her Master's in the Bioinformatics module and also undertook a computer-based research project based on RNA-sequencing to further enhance her skill-set. This consolidated her interest in incorporating statistical techniques, bioinfomatics, programming and computer-based research with wet-lab functional work and hence her interest in carrying out her PhD project.

Charli has also worked closely with GSK throughout her project and has provided them with genetic evidence to help support ongoing clinical trials into a novel treatment for anaemia due to chronic kidney disease. She has gained extensive expereince of being in an industry setting and translating genetic findings to impact drug development and patient care. She undertook a project with them working on pQTL data, colocalisation analysis and finemapping approaches to help improve their current genetics pipelines and identify novel target-indication pairs which has led to downstream development of novel treatments.

This research focuses on identifying genetic variants that influence circulating factors, like erythropoietin (EPO), which is altered in chronic kidney disease (CKD) and adverse cardiac outcomes. These variants will then be used as instruments to carry out Mendelian Randomisation to test the causal relationship between higher levels of circulating EPO  and haemoglobin and adverse cardiac outcomes. Data will be obtained from the UK Biobank alongside the InCHIANTI, PREVEND and HealthABC studies.

We performed a genome-wide association study meta-analysis of body fat distribution, measured by waist-to-hip ratio adjusted for BMI (WHRadjBMI), and identified 463 signals in 346 loci. Heritability and variant effects were generally stronger in women than men, and the 5% of individuals carrying the most WHRadjBMI-increasing alleles were ~1.62 times more likely than the bottom 5% to have a WHR above the thresholds used for metabolic syndrome. These data, made publicly available, will inform the biology of body fat distribution and its relationship with disease.