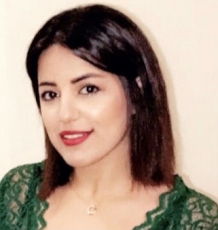 I completed my BSc degree in Biomedicine at Birkbeck, University of London, before moving to Imperial College London, to complete my Master’s degree in Biomedical Research in Microbiome in Health and Disease. During my Master’s degree I researched at the National Heart and Lung Institute on the role of chemokine CXCL4 in monocyte migration and differentiation to macrophages, and its contribution to atherosclerosis. Additionally, I completed another research project in metabolic profiling and the microbiome in the department of systems and computational medicine where I researched on the role of human milk oligosaccharides protection against Group B Streptococcus colonisation in babies. Published in the clinical and translational immunology journal.

I then joined Hvivo in London, a pharma and biotech industry where I performed tissue culture, blood sample processing and contributed to the delivery of clinical trials. In 2017, I joined the Wingate Institute of Neurogastroenterology at Queen Mary University of London where I researched on patients with Ehlers-Danlos Syndrome (EDS) and the association of EDS with gut pain. During my time at the Wingate I simultaneously managed and facilitated clinical trials and academic studies which subsequently led me working in clinical trials facilitation and management at Imperial College London, NHS Healthcare Trust at Hammersmith Hospital. I then relocated and moved to Qatar, Doha where I worked as a research associate in diabetes at Qatar Biomedical Research Institute, Hamad Bin Khalifa University - Qatar Foundation. Our team was focused on beta cell encapsulation and hypoxia induced beta cell survival.  Upon returning to the UK I have joined Dr Kate Ellacott’s lab to study my PhD project looking at astrocyte regulation of brain circuits controlling blood glucose.