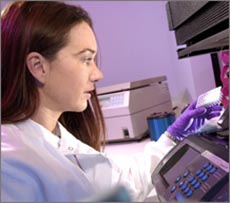 The monogenic research department works on defining the genetic cause of monogenic disorders. It then uses information on the genetic defect to define future improvements in therapy and medical care and to give new scientific insights

The emphasis is on diabetes and also low blood sugars resulting from excess insulin (Hyper Insulinism). The work is led on the clinical side by Professor Andrew Hattersley FRS, FRCP and on the molecular genetic analysis by Professor Sian Ellard FRCPath. The department was set up by these two colleagues in 1995.

The quality of the research in the Department of Diabetes is evidenced by the 800 research papers produced in the last decade including publications in Nature, Science, Nature Genetics, Lancet, and New England Journal of Medicine and over £50M research funding from MRC, Wellcome Trust, NIHR,EU, Wolfson Foundation and Diabetes UK

The Exeter diabetes department has led international efforts identifying how genetic variation can cause, or predispose to, diabetes.

Professors Ellard and Hattersley have discovered eight genes where mutations cause neonatal diabetes. This provided key new insights into the development and function of the insulin producing pancreatic beta-cells, knowledge vital for improving treatment for patients with diabetes- examples include gene KCNJ11 and GATA6.

Professor Hattersley has also been selected to direct a UK-wide MRC-funded pilot project to develop a stratified approach to the therapy of patients with type 2 diabetes.

The diabetes team’s most clinically significant research has shown that different genetic subtypes have very different responses to treatment; the first examples of pharmacogentics in diabetes. They proved that HNF1A MODY patients were more sensitive to the glucose-lowering effects of sulphonylurea drugs with a formal randomised trial. Consequently, thousands of patients worldwide have achieved improved glucose control by using sulphonylurea tablets, instead of insulin or other therapies

The lives of patients with neonatal diabetes have been revolutionised by the research conducted by Hattersley’s team. They showed that the two commonest genetic subtypes that affect the pancreatic beta-cell potassium channel are much better treated with sulphonylurea tablets rather than insulin injections. Their work meant the rewriting of international guidelines for these patients to include immediate genetic diagnosis. Patients from over 80 countries now have a normal life on tablets, when they expected to be on insulin for the rest of their lives.

The diabetes team clinical and physiological studies of 1,400 patients with monogenic diabetes have been crucial in defining diagnostic criteria for the different subtypes and are the basis of international clinical guidelines. Novel insights into the fetal beta-cell, and the relationship between birth weight and diabetes in later life have come from innovative studies of birth weight of patients with monogenic diabetes and type 2 diabetes.

The research discoveries have been translated into clinical practice by establishing an NHS diagnostic testing service for patients from the UK and abroad with referrals received from 84 countries across all five continents. Specialist advice is provided by e-mail, via a website (with >100,000 hits) and through a UK network of Exeter-trained genetic diabetes nurses. See departmental website.

• Work on other monogenic conditions

Who we are
Awards
Find out more