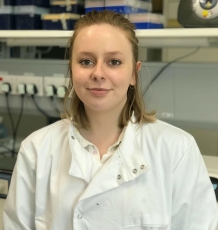 Now based in the Living Systems Institute (LSI), her current research is investigating non-coding RNAs in the context of neurodegenerative disease.

Sophie's PhD project focuses on the interactions of non-coding RNAs (ncRNAs) and aging pathways in driving motor neuron degeneration in Amyotrophic Lateral Sclerosis (ALS). ALS is a progressive disease characterised by the death of motor neurons in the central nervous system. Currently there is no effective treatment available for this fatal disorder, her project aims to investigate potential biomarkers and/or therapeutic targets in the context of ncRNAs.

Sophie works in the laboratories of Dr Akshay Bhinge and Professor Andrew Randall, based on the Streatham Campus.