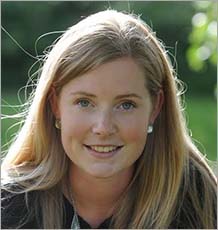 Prior to joining the University of Exeter Martine worked as a nurse at Stavanger University Hospital in Norway from 2010-2014, and after completing her Master’s degree in Health science in 2014 she started working as a research nurse at Centre for Age-Related medicine (SESAM), Stavanger University Hospital. Martine has also worked as the responsible research nurse on the project “Pain management in people with dementia living in care homes” at King’s College London from October 2015 until the end of January 2016.

Outside of work, Martine’s interests include horseback riding, indoor climbing, mini-golf and skiing.

My PhD is entitled “Health promotion and quality of life in dementia – User experiences form an educative intervention in early stage dementia”. Using a mixed methods approach, I will explore the experiences of attending a 12-week health promoting course for older people with early stage dementia, as well as the effects on carer stress, neuropsychiatric symptoms and depression.