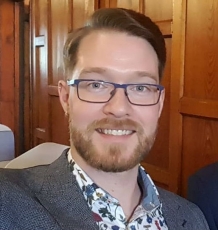 Originally from Burton-on-Trent, Jonathan studied for a BSc in Biomedical Sciences at the University of Southampton, specialising in the theory of developmental origins of health and disease. He then moved to the University of the West of England to study for an MSc in Biomedical Sciences: Cellular Pathology, graduating in 2013, with an in-depth research project focused on triple negative breast cancer and mechanisms of metastatic initiation in peripheral tumour tissue. Jonathan subsequently worked for the At-Bristol interactive science centre where he co-ordinated training courses for primary and secondary school science teachers to improve their scientific knowledge, whilst also participating himself in public engagement through science communication and volunteering in outreach projects.

Most recently, Jonathan has been based at the University of Plymouth, Peninsula School of Dentistry, where he has studied for a PhD in Oral and Dental Sciences, under the supervision of Dr Bing Hu, investigating how specific cell populations within salivary gland tissue may be damaged through exposure to ionising radiation and Sjogren’s syndrome and potential methods to initiate tissue regeneration.

Jonathan made a side step in January 2018 into the field of epigenetics as a research technician/assistant within the group of Professor Jonathan Mill, working on an MRC project investigating regulatory genomic variation associated with schizophrenia in human neuronal nuclei. Most recently, in February 2019, Jonathan has started work as a Research Fellow on a project that hopes to establish the role of epigenetics during foetal stages of neurodevelopment as a potential cause for autism spectrum disorders.

Jonathan is interested in developmental origins of health and disease, and has undertaken successive projects that investigate this area using significantly different approaches; from using rodent models to investigate nutrient uptake across yolk sac membranes in developing conceptuses, and modelling the developmental stages of salivary gland development through the use of three-dimensional organoid tissue culture models.

Now, Jonathan is eager to expand his skills by using sequencing techniques and coding based statistical analysis pathways to characterize DNA regulation mechanisms such as DNA methylation and histone modification, in different psychiatric disorders and throughout foetal neurodevelopment. In the long term, Jonathan hopes to further investigate the functional impact of DNA modifications as a mechanism for enhancing disease risk or altering brain development pathways.