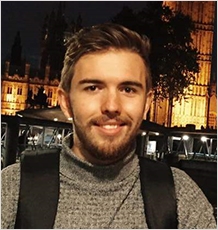 Joe graduated from the University of the West of England, Bristol, with a BSc in Biological sciences, specialising in genetics. Following this, he studied for an MRes in applied sciences at the same university. The title of his MRes was ‘Ex-situ conservation of the pancake tortoise (Malacochersus tornieri): Novel DNA markers for the genetic characterisation of a captive population’. During this project he developed novel microsatellite and SNP markers that were used to characterise the genetics of a captive population of Pancake tortoises contained in zoos from across Europe. In both his BSc and MRes he had developed a keen interest in genomics and bioinformatics, but wanted to apply them in human health and disease. Joe subsequently accepted a role in Prof Andrew Crosby and Dr Emma Baple's team here at Exeter University working on the molecular basis of rare inherited monogenic diseases.

Joe's research at Exeter focuses on the investigation of the genetic and molecular causes of inherited monogenic conditions, from the identification of potential causal genes through to functional studies of the disease mechanism responsible. Currently he is working with multiple candidate genes that disrupt ciliary function and cause situs inversus, male infertility and primary ciliary dyskinesia (PCD). Most of the families involved in this work have been identified through a community genetic program based among the Amish populations of Ohio (USA) coordinated by his supervisors Dr Emma Baple and Prof Andrew Crosby.