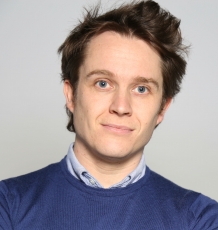 Dr Crawford Winlove grew up in London, and was educated at the University of Bristol. Crawford was introduced by Dr Robert Meech to the possibility of identifying the biophysical basis of behaviour in simple animals. As a result, after a period of fundraising for Amnesty International, Crawford returned to Bristol to complete a PhD with Prof. Alan Roberts FRS. This research used in vivo patch-clamp electrophysiology to understand the role of spinal neurons in animal models of behaviour.

Following the completion of his PhD Crawford was invited to join the prestigious Human Brain project at the Ecole polytechnique fédérale de Lausanne (EPFL), but declined to pursue his developing interest in the roles of cognitive processes in human goal-directed behaviour. Crawford accepted an Honorary Research Fellowship at the University of Bristol, and a Teaching Fellowship at the Peninsula College of Medicine and Dentistry in 2009. Crawford was appointed as a Lecturer in Neuroscience at the University of Exeter in 2011, and became a Senior Lecturer in 2018.

Crawford is a Cognitive Neuroscientist, with a general interest in how neural processes give rise to human behaviour.

Most recently, Crawford’s work has focused on Imagination – our capacity for sensory-like experiences in the absence of corresponding external stimuli. A key aspect of this has been elucidating the neural bases for marked differences in imagery vividness: its absence, Aphantasia, and its counter: Hyperphantasia. Much of this work, the Mind’s Eye Project, has been funded by the Arts and Humanities Research Council – and forms the basis of an art exhibition currently touring the UK.

An earlier focus of his work was addiction and substance abuse, motivated by the appalling impact of these conditions. A particular interest has been the neural correlates of craving, an emotional state which appears to precipitate relapse in many substance abusers – and yet be unknown to others. Crawford’s computational modelling of previously published neuroimaging data is starting to reveal the neural basis of these clinically important differences.

The neural correlates of Aphantasia and Hyperphantasia.

Contrasting the neural correlates of Visual Imagery with those associated with Attention, Working Memory, and the Default Mode Network.

The neural correlates of motor imagery.

The role of Imagination in Creativity.

How the Neuroscience of imagination can be applied in the workplace

The Journey to Medicine: A Residential Intervention

Crawford represents Education and Outreach for the British Neuroscience Association (BNA), and has been a Non-parent Governor, at Clyst Vale Community College since 2013.

I am the Local Group Co-ordinator (Exeter and Plymouth)

I am a member of the Teaching Special Interest Group.

I served on abstract review committees in 2012-15

Crawford also co-ordinates the Medical School’s efforts to Widening Particpation, an area of work which seeks to redress the current reality that children growing up in disadvantage are about 22 times less likely to go to a Highly Selective University than other children (Social Mobility Foundation, 2014). 7% of the UK population studied at an Independent School, compared to 61% of those working in Medicine (Sutton Trust, 2012).

Behind such headlines, there are many ways of characterising disadvantage - all of them imperfect. Such measures can, however, help to prioritise our engagement with those in the greatest need. One such measure of deprivation is living in a Low Participation Neighbourhood (LPN1), defined as a Census ward that falls in the UK-wide bottom quintile for the rate at which its residents have participated in Higher Education.

At most Medical Schools in the UK, around 3% of Medical Students come from LPN1 areas. Under Crawford’s leadership, our sustained endeavours to widen participation have seen this figure rise from 4% to 18% amongst our newest entrants. Around 85% of our Medical Students attended a State School.

External funding has played a crucial role in this success, as exemplified by the Outbreak! Project funded by Health Education England. This project involved a series of six-week sessions in which 11-year-old children managed a hypothetical “global health crisis” – something like a virus outbreak. This crisis becomes the focus of all their classes: science classes look at the biology of viruses, whilst geography classes look at the afflicted country in detail, and so on. Crucially, the pupils’ decisions shape how the crisis unfolds, following the feedback of clinicians. Launched four years ago, our evaluation of the intervention’s impact on attitudes to learning, behaviour and attainment will shortly be submitted for publication.

The course was developed to realise our central commitment to research-engaged teaching. Our aim is not to simply share information, but rather to help students participate in the process of scientific discovery. Therefore, alongside formal teaching sessions, we encourage all our students to become active participants in our inter-disciplinary community.

Crawford has spent over 4000 hours delivering face-to-face teaching for Medical and Science students, for which he has received multiple awards and commendations.

He currently teaches on a range of modules, and convenes the final year module in Cognitive Neuroscience.

Crawford is a Fellow of the Higher Education Academy.