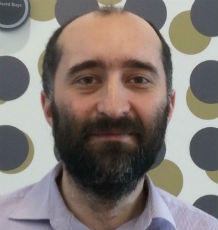 Currently I am a Independent Research Fellow in the Living Systems Institute at the University of Exeter. I have been formally trained as a Physicist but my research has developed at the interface between Physics and Biology.

I have started  my research career by investigating fundamentals of membrane biophysics during my PhD when I have discovered that the bacterial signal indole is a natural ionophore regulating a key biological process in bacteria (C. Chimerel et al., 2012, Biochemica and Biophysica Acta‑Membranes). Subsequently I pursued the effect of indole on mitochondria and I have shown that indole is capable to uncouple oxidative phosphorylation from ATP production revealing a potential link between the prokaryotes and eukaryotes (C. Chimerel et al., 2013, ChemPhysChem). I then recognised that indole is produced by bacteria in the human gut in miliMolar concentrations and I speculated it could affect the functioning of the cells in the gut epithelium via it ionophoric properties. Starting from this hypothesis I proved that indole modulates the secretion of gut hormones from the enteroendocrine cells in the gut epithelium in vitro and I have revealed the molecular details behind this modulation (C. Chimerel et al., 2014, Cell Reports).

I have been involved with other research projects in the past with a special focus on the passive diffusion through biological membranes. I started working on this topic while studying for my BSc Degree when I demonstrated that a membrane porin, Outer Membrane Protein F (OmpF), embedded in a lipid membrane is conformationally stable on a broad temperature range: 0⁰ to 90⁰C (C. Chimerel et al., 2008, European Biophys. J.). Analysing the temperature dependence of the ionic current flowing through OmpF I developed a better understanding of the physics of ionic transport in confinement (C. Chimerel et al., 2008, European Biophys. J.) and investigated the kinetics of antibiotics passing through membrane porins (K. R. Mahendran, C. Chimerel et al., 2009, European Biophys. J.). During my PhD I have complemented this expertise by developing protocols to reconstitute membrane porins in nanolipidbilayers supported on glass capillaries and I investigated the passive diffusion of molecules with intrinsic fluorescence (e.g. indole, norfloxacin). These experiments clarified an overlooked transport pathway for the bacterial signalling molecule indole passing through lipid membranes (S. Pinero-Fernandez, C. Chimerel al., 2011, J. of Bacteriology). Furthermore I have developed a novel, label-free optofluidic assay, which quantifies the permeability coefficient of auto fluorescent antibiotic molecules permeating through cellular membranes (J. Cama et al. 2014 Lab Chip).

Our research group focuses on problems of molecular transport across cellular membranes. We are particularly interested and motivated to provide answers for biomedical questions such as the problem of drug permeation through cellular membranes. Moreover we are keen to develop new technological tools for a better understanding of molecular transport.

Drugs entering cells are routinely quantified by lysing the cell and measuring drug levels in the cell lysate, for example by fluorescence spectroscopy or mass spectrometry. Although this method provides important insights into the problem of drug permeation it is restricted to cell‑population analysis and lacks the time resolution. In this project we are developing a novel single cell spectrometer designed to quantify the spectral fingerprint of drugs absorbed in cells. As a biological model we are currently using bacteria and antibiotics to validate these measurements.

Funded by: Academy of Medical Sciences Springboard Grant and University of Exeter

Historically cells have been catalogued in respect to their architecture by using fluorescent dyes to specifically label cellular and subcellular structures. Cell shape, organelle distribution and spatial localisation within the tissue have all been used to distinguish cell types. More recently, antibodies linked with fluorescent markers that can bind to individual molecules have been developed and used to differentiate cell types. However, such approaches are inaccurate, severely limited in their application to live cells and are difficult to use for classifying and separating cells based on functional phenotypic responses. In this project we are developing an optofluidc platform which uses cell function to differentiate cell types. By analysing in real time the cell responses to specific stimuli, the device isolates from a mixture cells that specifically respond to one or more stimuli.

Funded by: BBSRC BB/R022127/1 Research Grant and University of Exeter