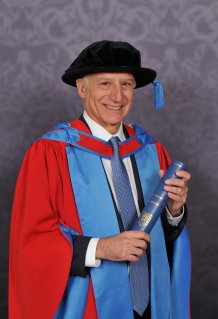 A physician and scientist who founded both a national Alzheimer’s research non-profit in the USA and one of the country’s first Alzheimer’s disease clinics has received an honorary degree from the University of Exeter.

Dr Howard Fillit, who has 40 years’ experience of researching Alzheimer’s and related dementias, joined the Alzheimer’s Drug Discovery Foundation (ADDF) in 1998 as founding executive director and chief science officer, with co-founders and co-chairmen Leonard A. Lauder and Ronald S. Lauder. . Their mission is to rapidly accelerate the discovery and development of drugs to prevent and treat Alzheimer’s disease.

To date, the ADDF has awarded more than $130 million to fund over 600 Alzheimer's drug discovery programmes and clinical trials in 19 countries. Twenty percent of the drugs in clinical development for Alzheimer's disease have received support from the ADDF.

Dr Fillit said: “I’m proud and delighted to be awarded Doctor of Science by the University of Exeter,” Throughout my career, I’ve been dedicated to finding new ways of treating Alzheimer’s disease and related dementias, and I’m excited by the promise I see at Exeter, where investment in techniques such as neuroimaging scanning and research will no doubt make significant contributions to preventing and treating this terrible disease.”

Dr Fillit has been part of significant progress over the years. The ADDF supported research that led to the first FDA approved diagnostic test for Alzheimer’s disease, and has recently partnered with Bill Gates and other leading philanthropists to create the Diagnostics Accelerator. This research initiative supports the development of simple and non-invasive biomarkers, such as blood tests, eye scans, and digital tools for Alzheimer’s disease, which could transform treatment within three years.

Driven by the need to provide better care and service for people with dementia, Dr Fillit set up one of the USA’s pioneering Alzheimer’s disease clinics at the Rockefeller University Hospital where he worked.  There he began a clinical trial into oestrogen replacement and a programme of pre-clinical drug discovery, opening up a new field of research.

Dr Fillit said: “I’m really proud of the Foundation’s work in supporting a critical and under-funded area of early-stage clinical trials of potential treatments. This area is high risk, and often struggles to attract funding – but without these early trials, many great ideas would never get off the ground. By assuming the risk and bridging this critical gap in funding, the ADDF enables leading scientists to pursue pioneering ideas to cure Alzheimer's disease that would otherwise go unexplored.”

Professor Clive Ballard, Dean and Pro-Vice-Chancellor at the University of Exeter Medical School, said: “Howard is an international pioneer who has made a really significant impact in dementia research and care, and I’m delighted that he’s receiving this degree.”