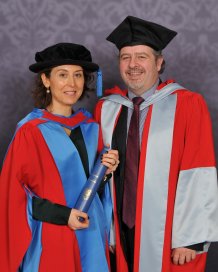 The editor of the Lancet Neurology, the world’s leading publication in clinical neurology and brain health, has been awarded an honorary degree at the University of Exeter.

Dr Elena Becker-Barroso became one of the first female editors-in-chief of a top scientific journal when she took up the position in 2012. She has played a pivotal role in making the title the top number 1 ranked academic journal for clinical neurology and within the top 20 of all medical journals.  Hundreds of thousands of people access Lancet Neurology articles digitally each month, and thousands more read the printed publication thanks to the relevance and quality of its research articles.

Elena said: “I’m delighted to be awarded this honorary Doctor of Science degree. I’m proud of the international standing of Lancet Neurology, and it’s really gratifying to be recognised for our work around the important issue of promoting high-quality research around brain health.”

Initially a researcher, Elena worked with some of the top molecular biologists in the world before moving into science communication and joining Lancet Neurology as Senior Editor in 2003.

Professor Clive Ballard, Executive Dean and Pro-vice Chancellor of the University of Exeter Medical School, said: “Elena is an inspiring figure in the global scientific community and this honorary degree is extremely well deserved. She excels at her position of great responsibility and influence, and has taken great care to promote neurology internationally, and specifically the hugely important area of dementia research.”