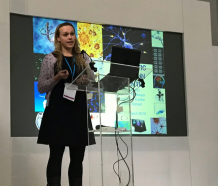 Professor Katie Lunnon has been awarded the Cavanagh Prize

A University of Exeter researcher has been awarded the Cavanagh Prize, selected as the top nominee from candidates across Europe.

The Cavanagh Prize is awarded by The British Neuropathological Society to a young nominee who has made a significant contribution to the understanding of the Neuropathology of Neurological Disease.

Professor Katie Lunnon, Associate Professor of Epigenetics, was nominated for her research into the role of epigenetic mechanisms in dementia. Epigenetic processes are chemical tags added to the DNA which turns genes on and off, and can be influenced by external factors such as the environment in which cells dwell.

Katie said: “I am absolutely thrilled to receive this award for our dementia research. I am fortunate to have a set of highly talented researchers in my team, and so this prize is also testament to their hard work in the field.”

Katie leads a research team at the forefront of research into the role of epigenetics in Alzheimer’s disease. Her work has provided some of the first evidence of differences in epigenetic tags in the brains of people with Alzheimer’s, opening the door to a much-needed new approach to tackle the disease.

Clive Ballard, Professor of Age-Related Diseases at the University of Exeter Medical School, said: “Epigenetics is an exciting area of research in Alzheimer’s disease as unlike our genes, these processes can be influenced by external factors, meaning they could be promising targets for future treatments.

“At Exeter this is a key area of research and we now know epigenetics plays a key role in Alzheimer’s disease, so it’s fantastic to see this recognised here.”

Any European neuroscientist under the age of 40 is eligible for nomination. The 2,000 euro prize is awarded alongside a lecture delivered by the winner at a meeting of The British Neuropathological Society. The biennial prize has been awarded to leading, young researchers since 2005.

The prize is named after Professor John Cavanagh, who has led a distinguished career in experimental neuropathology from 1948. He is one of the founding members of The British Neuropathological Society, and the founding editor of the Society Journal.