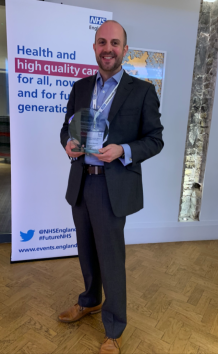 A world-leading diabetes specialist at the University of Exeter Medical School has received an NHS award for improving health outcomes for patients.

Dr Timothy McDonald, of the University of Exeter Medical School, has been recognised by the NHS for his contributions to diabetes diagnosis and health care sciences in the UK. He is also a Consultant Biochemist leading the Academic Department of Blood Sciences at the Royal Devon and Exeter Hospital.

At the 13th glittering Healthcare Science Awards ceremony in London on 7th March, Timothy was awarded the accolade for “Excellence for Improving Patient Outcome”.

He was also one of two to be nominated for Healthcare Scientist of the Year out of 50,000 working in the UK.

On receiving the award, Timothy said: “I’m absolutely delighted to win this award, which recognises the contribution of a much wider team at Exeter. Our team has worked incredibly hard and is so dedicated to supporting patients, and meeting the demands of a changing NHS. It’s wonderful to see this translate to meaningful benefit for people with diabetes that this has been recognised by the NHS.”

He has also worked alongside Professor Andrew Hattersley and others to develop a simple, inexpensive test which measures C-peptide, determining how much insulin a person is producing, and clarifying if a patient has been diagnosed correctly. The test has been adopted across the NHS.

This award follows his receiving the Department of Health’s Young Healthcare Scientist of the Year award in 2012, and the Association for Clinical Biochemistry’s Professors Prize in 2016.

Professor Sir Steve Smith, Vice Chancellor of the University of Exeter, said: “Huge congratulations to Timothy. This is a major achievement that celebrates the incredible impact that our diabetes research has on patient care. It celebrates our close working relationship with the NHS, which ensures research is addressing clinical need.”