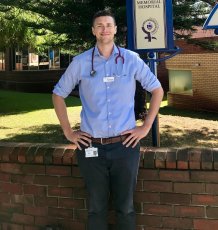 After leaving school after his GCSEs, a career in Medicine was far from one University of Exeter Medical School student’s expectations. However today, ten years on, Daniel Vowles has graduated to become a doctor.

Daniel has successfully completed his degree at his top choice university to become a fully-fledged doctor, after leaving school following his GCSEs. Having worked as an ambulance, patient transporter and frontline crew member, he wanted to follow his patients through the care system and become a doctor.

He took the GAMSAT exam, a six hour test on physical and social sciences. It allows you to apply for medicine courses as a postgraduate at some universities provided you have enough NHS experience – this includes Exeter.

Medicine graduate Daniel, 27, said: “I feel humbled and deeply thankful for the opportunity that the Medical School has given me. Medicine has opened doors for me that I never thought I would see. I also feel a lot of pride for what I have achieved and would encourage others from similar backgrounds to me to chase their dreams. Determination and resilience can get you where you want to be.”

Leaving school in Bristol at 16 with GCSEs and no A-Levels, Daniel found himself doing small jobs here and there.

At 17, he asked about working with his friend’s mother at a local ambulance base as patient transport. He worked his way up the ranks, both in the South West and London, eventually becoming a frontline ambulance crew member.

Daniel, said: “My time here was invaluable. The experience and knowledge that I gained in the back of a 999 ambulance was unique and gave me confidence in my ability to help people. However, I started to feel constrained by my role and worried that I might not be able to reach some of my goals. I longed to be able to travel with work and I also wanted more continuity of care and to find out what happened to my patients.”

This experience ignited a spark in Daniel, who wanted to follow his patients through their care. Originally not sure it was possible to get onto a medicine course, he searched online and found the GAMSAT exam.

A West Country boy at heart, The University of Exeter Medical School was his first choice. Having just finished a 12 hour shift in 2013, Daniel was cleaning out the back of an ambulance when he received a call to say he had an interview here in Exeter.

Daniel said: “I was over the moon. Only one interview from my four applications, and it just happened to be my top choice. Clearly it was meant to be, as I found out that I had been successful and given a place to chase a dream.”

From humble beginnings back when he was 17, Daniel is ready to begin the next chapter of his story 10 years on. He is heading into practice for the first time in Dorset County Hospital as a junior doctor.