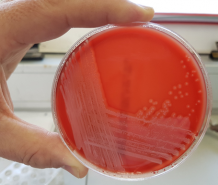 A new bacterial strain will be named after Cornwall following its identification from a skin infection.

Staphylococcus cornubiensis, named after the medieval name for Cornwall, Cornubia, was isolated from a sample submitted to the laboratory by a local GP.

Cornwall-based researchers at the University of Exeter Medical School and the Department of Clinical Microbiology at the Royal Cornwall Hospital in Truro, investigated its similarity to known related bacteria. They found that the strain was unique and likely belonged to the Staphylococcus intermedius group (SIG), a group of bacteria that is also associated with pets.

The work was in part funded by the Wellcome Trust and the Biotechnology and Biological Sciences Research Council (BBSRC) and is published in the International Journal for Systematic and Evolutionary Microbiology.

Dr Michiel Vos, principal investigator on the study at the University of Exeter Medical School said:

“Routine hospital microbiology procedures focus on the isolation of well recognised infective species. However, although bacteria on agar plates can look deceptively similar, they often represent a rich genetic diversity, with substantial variation in infectivity and susceptibility to treatments, including antibiotics.

“By improving detection methods, we were able to distinguish this species from related species. Sequencing the entire genome, we could confirm it to be genetically unique.”

Lead author Dr Aimee Murray added: “We now need to know how prevalent this new species is in human infections. As some related species are transferred from pets to humans, we also would like to find out whether owning pets, or any other potential risk factors, increase the chance of infection.”

John Lee and Richard Bendall of the Royal Cornwall Hospital explained that the new species was discovered during a project to increase recognition and detection of SIG bacteria in the diagnostic laboratory.

Dr Bendall said: “Discovering a new species was an unexpected benefit of our efforts to improve the routine work of the department.”