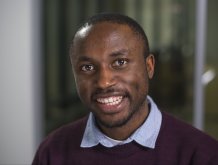 Afi is one of 600 young scientists worldwide to be invited

A PhD student from the University of Exeter has been invited to attend a prestigious worldwide event.

Afi Leslie was one of just 600 students worldwide to be invited to the 68th Lindau Nobel Laureate Meeting. Only the most qualified young scientists are invited to attend the selective annual event.

Each year, around 30 Nobel Laureates convene in Lindau, Gemany, to meet undergraduate and post-doctoral research students from around the world. Meetings comprises lectures, discussions, master classes, and panel discussions, designed to trigger the exchange of knowledge, ideas, and experience between and among Nobel Laureates and young scientists.

This year’s meeting is dedicated to Physiology and Medicine, and will have 43 Nobel Laureates in attendance.

Afi said: “I’m elated and very honoured to be to be invited for such a prestigious meeting of outstanding scientists. The occasion presents a rare opportunity to meet role models and mentors and have an insight into their work. It is a onetime opportunity to seek advice, exchange thoughts and be inspired by Nobel Laureates themselves.”

Professor Noel Morgan, who supervises Afi, said: “This is a highly selective meeting which recognises upcoming stars in science, and we’re incredibly proud of Afi for being invited.”

The event alternates between the three Nobel Prize disciplines each year: Physiology and Medicine, Physics, and Chemistry. This year’s meeting will take place from 24th – 29th June.