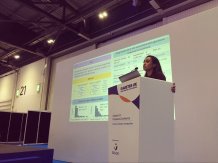 Two Exeter students have won first place and runner-up in the national prize, presented at the conference in London last week.

Terrence Chan and Ealaff Shakweh were winner and runner-up of the Lilly Diabetes Clinical Science Poster Award respectively. Both are intercalating Medicine students, meaning they are undertaking an optional placement year as part of their degree.

The students were among four researchers shortlisted for prizes. Dr Kashyap Patel, a Clinical Lecturer at the Medical School, was nominated for the Young diabetologist & endocrinologist trainee award, and PhD student Jessica Chaffey was shortlisted for the Lilly Poster Prize in Basic Science.

Professor Noel Morgan, who leads the Islet Biology research team at the Medical School, said: “The extensive representation from Exeter at the conference last week was testament to the hard work of our teams in contributing to globally excellent research. It was a particular pleasure to see so many of our up-and-coming young researchers shortlisted among the prestigious prize categories.”

Senior academics Professor Andrew Hattersley and Dr Mike Weedon were selected by an expert panel to deliver named lectures at the conference.

Professor Hattersley, who was recently awarded the CBE for his work in revolutionising diabetes diagnosis and treatment, delivered the Banting Memorial Lecture, the highest award bestowed by Diabetes UK. The lecture is named after Frederick Banting, whose research resulted in the discovery of insulin, it is awarded to a researcher who is internationally recognised for their eminence in the field of diabetes.

Dr Weedon delivered the RD Lawrence Lecture, named after the diabetes research pioneer who founded the Diabetes Association in 1934. The lecture is awarded to the best young diabetes researcher working in Britain and it is the 7th time it has been won by an Exeter researcher in the last 14 years.

Other highlights from the event included Dr Hanieh Yaghootkar’s research on new genetic variants which could lower a person’s risk of Type 2 diabetes, and Professor Rob Andrews sharing his new research suggesting that exercise could delay the progression of Type 1 diabetes.