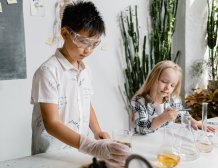 A series of fun activities are planned for the event.

Families affected by ADHD will attend a day of fun activities at the University of Exeter, designed to bust myths, offer support and share the latest research.

The event, on Sunday, September 11, aims to connect, celebrate, and raise awareness about a condition that is widely overlooked, Attention Deficit Hyperactive Disorder (ADHD). ADHD is a neurodevelopmental condition that is characterised by symptoms of inattention, hyperactivity, and impulsivity which are often overseen as the symptoms are not always clear or may be dismissed as naughty behaviour.

The event, which runs from 10:30am to 4pm, will provide families with the chance to connect with other like-minded families, share experiences and strategies and hear from experts about the science behind ADHD, all while enjoying a much-needed day out.

The event will include activities such as a scavenger hunt, a Q&A panel, sporting activities, science experiments, arts and crafts and myth busting.

Dr Abby Russell, the event leader and the University’s Senior Lecturer in Child and Adolescent Mental Health said: ‘’ADHD awareness is growing around the world, but there's still a huge lack of understanding in the UK about what ADHD is which in turn has the potential to create negative implications for many people who live with it. We need to do more to celebrate the positives for children with ADHD”.

Abby, whose research aims to explore the impact of ADHD in schools said: ‘’It is now more important than ever to raise awareness of this condition, eliminate the stigma surrounding ADHD, understand it as a difference rather than a disorder, and give those who live with it the timely support that they need.

‘’Days like the ADHD and Science Family Fun Day are just a drop in the ocean to achieve this but it’s a stepping stone to celebrate individual exceptional strengths and talents, bring people together and enlighten families about the possibilities for those who have impairing traits of ADHD.’’

James Wenger, a father whose son lives ADHD, was diagnosed with the condition himself in his late adult life. He had no idea that the things he struggled with as a child were common symptoms for people with ADHD.

The 49-year-old said: “In retrospect, going back and looking at my primary school reports and the number of times I spent in the accident and emergency departments with broken bones, it looked like an incredibly typical ADHD story.

‘’I was a little apprehensive about the diagnosis at first because of public perception. People assume it’s just for kids or naughty, hyperactive children with discipline problems. There are so many social stigmas around it, none of which are always true but tend to be pervasive’.”

However, for James, being diagnosed later on in life gave him a sense of “clarity and empowerment’’.

‘’After I received my diagnosis, there suddenly became a reason why a lot of things were challenging for me. Not an excuse for why I couldn’t do certain things but a reason why they were difficult and that helped me with furthering the strategies that I’ve used throughout my life. It allowed me to pause and learn how my brain works and now I know why I do what I do.’’

James’ son whose symptoms became obvious at 5 years old and received a diagnosis at age 7, was also a motive for James to seek further information.

‘’As a parent of a child who is living with ADHD, a really hard thing to deal with is knowing that I get to look at my son and know that some things are just going to be tough. But the fact that I have a diagnosis means I can be an example and teach him techniques and strategies I’ve learnt over the years to help him overcome his own challenges. I’ve been lucky enough to be reasonably successful in a few things so hopefully he will think ‘if dad can do it, I can do it too’.”

The former business owner and current applied neuroscience master’s student has decided to share his expertise and experiences on the panel at the ADHD and Science Family Fun day.

In particular, he will be discussing the science behind ADHD and what it’s like to be an entrepreneur, grow a business, develop teams of people and how you can do all of that with ADHD.

Events like these are “extremely invaluable’’ to James and his family as he said: ‘’Not only does it raise awareness and celebrate the talents of those with ADHD, but it also allows society to start putting stigma in a box.’’