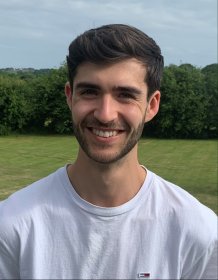 A University of Exeter Medicine student has received a prestigious award of £5,000 and reached the final of a global medical student competition.

4th year student Octavi Casals-Farre has been given the Wolfson Intercalated Award towards his Master’s degree in Genomic Medicine which he is completing during a year break from his Medicine studies.

He was selected based on his academic performance and the proposal for his medical genomics project. His work aims to help diagnose genetic predisposition for high cholesterol early, to enable personalised treatment and prevent cardiovascular events. The Wolfson Intercalated Award is an annual prize given to undergraduate students at selected medical schools who are likely to pursue a medical research career.

Octavi will also be competing as one of 15 finalists in the Elsevier ClinicalKey Student Global Challenge which has had more than 7,500 medical students participating from over 100 countries worldwide.

He has reached the final after making it through four rounds of questions over four weeks and submitting a creative video about resilience in times of Covid-19, leadership and managing conflict. The final is expected to take place in November. All finalists from around the globe will come together to challenge themselves in a one-of-a-kind clinical escape room.

Octavi, who is originally from Barcelona, said: “I’m very pleased to be recognised for my work on two occasions. The support from the Wolfson Foundation is incredibly helpful, and I look forward to completing my project alongside my Master’s next year to help improve early detection of risks for high cholesterol.

“Reaching the final of the Global Challenge was unexpected and very exciting. I look forward to travelling to meet the other students and doctors, and can’t wait to compete in all the challenges in the final.”

Professor Ian Fussell, Associate Dean of Education at the University of Exeter’s College of Medicine and Health, said: “We’re really impressed by Octavi’s achievements, and very proud that he’ll be representing us in the Global Challenge final. It’s a big success to have made it that far in a competition of more than 7,500 medical students, and we wish him good luck for the final round.”