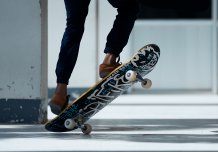 Skateboarding continues to be subversive despite being part of mainstream competitions such as the Olympics, researchers say

Skateboarding continues to be unkempt, subversive and tacitly political despite inclusion in mainstream competitions like the Olympics, experts have said.

The “discordance” between skateboarding’s ethos and capitalism raises questions about its continued incorporation into competitive sports, a new study says.

The research also shows how in times of disaster, such as the coronavirus epidemic, skateboarding allows opportunities for play and supports people’s physical and mental health.

Academics observed skateboarders and spoke to those in the community. They found an “arrythmia” which meant skateboarding’s unkempt iconoclast status has largely been preserved despite the fact the sport is part of lucrative business models, institutionalised regimes, and attempts to “contain” it within skateparks.

Dr Paul O’Connor, from the University of Exeter, who carried out the research with Dr Brian Glenney, from Norwich University in Vermont said: “Even though it is now an Olympic sport and attracts multimillion dollar endorsements, skateboarding is still subversive and that’s what makes it so exciting.”

“Skateboarding is discordant with other rhythms and interacts when disruption and disaster occurs. It is a type of disaster leisure. Disruption is an intrinsic element of how people practice, and later understand skateboarding. We also find that there is something revolutionary in skateboarding, a latent political orientation that is tacit. It becomes evocative in bodily action, in bursts of energy exacted in urban space.”

The study, published in the journal Leisure, Sport, Ethics and Philosophy, says this arrhythmic beat is caused by the way skaters move through cities prepared for interruption by pedestrians, vehicles and security guards.

The study is based on prior research on how following earthquakes in New Zealand, skateboarding thrived. New spots were created by ruptured roads, and access became possible to locations previously un-skateable as the parts of the city were closed and emergency services were directed towards more urgent concerns than skateboarders.

The approach fits with a growing dialogue on leisure in catastrophic and polluted times. The Coronavirus pandemic adversely impacted many sports, but skaters also took advantage of reduced pedestrian and security activity. The authors highlight that skateboarding is adaptive to disaster.

Dr O’Connor said: “The early months of the pandemic coincided with a dearth in skateboarding equipment as many China made products could not be delivered to skate shops and retailers through the world. This disruption became even more acute as the lockdown proceeded and individuals sought skateboards with increasing passion and interest.”

“While skateboarding was always destined to be topical in 2020 with its debut as a sport in the Olympics, remarkably the cancelling of the games was a further unpredicted boon to skateboarding as a sport and industry. The sport boomed in popularity during the pandemic just as slowness and slow sports with meditative and sensory qualities began to rise in popularity. Skateboarding, seldom framed as slow or quiet, thrived in the slow times and quiet places quarried by the pandemic. Many people picked up a skateboard for the first time recognising the potential it held for play and exercise in small and informal spaces. Yet, efforts to limit and control skateboarders persisted with many public skateparks locked or made unusable with skatestoppers and dumped sand.”