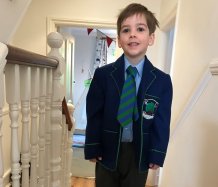 Scientists will visit school friends of a five-year-old boy who died of a fungal infection linked to his leukaemia, to share their pioneering research aimed at reducing further deaths.

Noah Tesselaar died in June 2020, after his blood cancer rendered his immune system too weak to fight off an invasive fungal infection, Mucormycosis.

In his memory, Noah’s family set up a charity, called Noah’s Pink Balloon Leukaemia Fund. The organisation aims to support innovative research which will deliver new ways to improve the early diagnosis of life-threatening infections common in blood cancer patients, and help advance treatment for leukaemia. Their first project will involve funding a research fellow, whose work will be dedicated to finding new answers.

Today, researchers at the University of Exeter will visit Noah’s friends at Kew Green Preparatory School in London on Friday May 6th. Noah was in his first year at this primary school when his family received his shock diagnosis of leukaemia. He sadly died after his first month of chemotherapy.

The charity has partnered with the University of Exeter’s Medical Research Council Centre for Medical Mycology, which is leading the way on research to tackle fungal infections. Their funding will help pioneer new research into the fungal infection that killed Noah. Mucormycosis is the second most common mould infection in patients undergoing chemotherapy for leukaemia and other malignancies. It leads to excessive destruction of organs, blood vessels and has extremely high mortality rates - of 80 per cent.

Professor Adilia Warris, who leads the research programme at the University of Exeter, said:

“As those at Kew Green Preparatory lost their friend Noah, they deserve to know more about fungi and fungal infections, and the research taking place in Exeter to reduce deaths due to fungal infections. Despite their high death toll, fungal infections are one of the most underfunded areas of research. It is an opportunity for us, working with Noah's Pink Balloon Leukaemia Fund, to raise awareness about fungal infections and the devastating impact these infections can have. We have developed age-specific materials to tell school-aged children about what fungi are, the good and the bad things, as well as the infections they cause. Raising awareness and involving the public, from young to old, is a key objective of our Centre.”

The visit will be led by researchers working with Professor Warris . It will involve a whole-school assembly, as well as targeted class visits, with researchers spending time with the pupils from the primary school. The children will take part in hands-on activities to help them understand what fungi are and how fungi can cause infections.

Jem Peck, headmaster at Kew Garden Preparatory School, said: “We’re so proud to have made Noah’s Pink Balloon Leukaemia Fund our chosen charity for this school year and the whole school community is dedicated to the cause. It is obviously close to our hearts as lovely Noah attended Kew Green Prep and was a bright and popular member of our school. We are dedicated to supporting and helping raise the money for the Fellowship at the University of Exeter and only too pleased to contribute towards such important medical research. It has been poignant and interesting to hear from, and spend time with, representatives from the MRC Centre for Medical Mycology. The children asked such carefully thought out and searching questions.”

Susan Tesselaar, Noah’s mother and co-founder of the charity, said:

“Noah was a kind, compassionate boy who always wanted to help people. He truly inspired me and in collaboration with the medical community, I want to raise awareness and highlight the danger of these fungal infections, which aren’t discussed enough. I’m so proud of Noah and of the person he was becoming, his spirit lives on through Noah’s Pink Balloon. We hope that the charity will make a difference in the medical community, as well as in acknowledging children and their parents faced with a blood cancer diagnosis”.