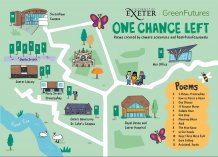 A postcard showing the poetry trail around the city of Exeter

Leading health professionals and climate scientists are using poetry to warn of the catastrophic impact of the climate crisis and there is “one chance left” to act in the lead up to, during, and after COP26.

The poems, which celebrate the natural world, warn there is no human health without planetary health.

The experts want to illustrate the urgent changes needed to tackle the climate crisis, and show how poetry can be a powerful and transformative tool to spread the word about damage to the environment.

People can read the poems in an e-book, One Chance Left, available online at the University of Exeter’s Green Futures website, and through the digital collection of Libraries Unlimited in Devon. A limited number have been printed on recyclable paper available for purchase. There are 12 poems, one for each of the days COP26 will take place.

The project will be showcased at the IPCC-WMO-MO Science Pavilion at COP26 on Friday 5th November at 18:00 in collaboration with the Met Office and Hot Poets, and at the Arctic Base Camp Tent on Saturday 6th November at 13:00 as part of the Fringe Festival organised by Hermes Federated Ltd.

Prominent campaigners and communities from Devon and Cornwall and the world, including Baroness Floella Benjamin, Hugo Tagholm from Surfers Against Sewage, pupils from West Exe School in Exeter, Ben Bradshaw MP, University of Exeter drama students and youth activists from around the world – such as Cassidy Kramer from the Inupiaq community, Alaska and Wenying Zhu from China - have recorded the poems. Their performances will be streamed on Spotify, DevonStream, and will also be featured in a short film.

West Country musicians in England have transformed this collection of poems into songs. The One Chance Left Collective is now available on all major streaming platforms including Spotify and to purchase on BandCamp, with all proceeds going to Greenpeace and Surfers Against Sewage.

People can take part in a One Chance Left 12 Poetry Flags Trail in Exeter, with poems displayed at Exeter Central Library, the Royal Devon and Exeter Hospital, Queen Street, Princesshay, the Met Office and both University of Exeter campuses in Exeter, and at the Penryn Campus in Cornwall.

Professor Ian Fussell, Associate Dean of Education, College of Medicine and Health, University of Exeter, said: “We hope people enjoy these poems, but more importantly, it inspires them to act now and make a change. This is everyone’s responsibility.

“The science alone is not getting the message across. Our leaders do not hear us; we bury our heads in the sand of the expanding desert.”

One poem, “Sudden Heat”, describes how “trees gasp as I breathe in. Ground bakes – my body and blood drawn towards the arteries of the earth.

“Once there were fish” describes boats lying “tethered on parched earth, hulls swollen, paint peeling like the blistered skins of fishermen on the run across a sudden desert”

The volume’s associate editors are Dr Sally Flint from the University of Exeter and novelist Dr Virginia Baily.  Dr Flint said: “Many who've experienced and researched climate change devastation going on around the world are united in believing there's 'One Chance Left' to save our ecosystems on which we rely for both planetary and human health - and powerful words and the arts can help in communicating ‘facts, findings and feelings’ widely - that there is still hope to hold on to and, it's only by joining together, we can save the world.”

Cecilia Mañosa Nyblon, Education and Skills Partnership Development Manager, and Project Lead, University of Exeter said: “Driven by hope for creating a green future at COP26, we have joined the forces of science, health and poetry to harness this unique opportunity to help catalyse new ways of collaborating across disciplines and institutions at a local and global levels to drive positive change. The time to act is now”

The project’s key partners are the University of Exeter, Met Office, Riptide Journal, Arts and Culture and Exeter Culture and the Economic and Social Research Council. It is supported by Artic Base Camp, Exeter City Council, Princesshay, the Royal Devon & Exeter Hospital, Devon County Council,and Exeter UNESCO City of Literature.

During COP26 and until 31st November people can be a part of One Chance Left by following the flags on the poetry trail, by collecting a postcard from Exeter Library or downloading a copy on phones from Green Futures website.