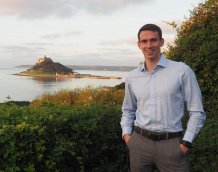 University of Exeter Medical Student sets up a community triathlon club to engage the people of Truro.

When University of Exeter medical student, Jake Keast arrived in Truro last September, he was immediately captivated by the picturesque town and vibrant population of active people. However, when the former English duathlon champion scouted the area for a triathlon club and couldn’t find one, he decided to do something about it.

“I've been coaching and personal training for a few years,” said Jake, 23, “so, I've got some experience of running clubs. When I saw that there was no triathlon club in the area for a good twenty minutes’ drive with such a massive population of outdoorsy people here, it felt natural that I would start one.”

Jake founded the Truro Triathlon Club in January 2022, with an aim to bring together the Cornish community and provide a safe space for fun, development, and growth. And though it’s just early days, the club has a growing membership of more than thirty people and participated in the Cornish Triathlon Series in April with members recording successes including 3rd place overall finish, 1st female overall and 1st in 50-59 age categories.‌

The club, which is open to the public, offers a range of flexible membership packages designed to meet individual needs. As a professional triathlete and coach, Jake and his team also offer one to one coaching sessions to people interested in taking their training to the next level.

The 2nd year medical student’s triathlon journey started in 2017 when he joined the University of Exeter as a Biological Sciences student. He became a member of the University’s triathlon club and acknowledges the support and guidance of the coaches and community members in helping him develop as a Triathlete.

He said: “With the help of the club coaches and a vibrant community, I entered into some competitions and in my second year, I became the 20-24 age group English Duathlon Champion and also qualified for several international events.”

He also praised the University’s high-performance department which he said has been “incredible” in his transition and supporting the balance of medicine and performance sports competition.

Speaking on balancing his studies with the club, Jake cites the importance of seeing the triathlon club as a source of wellness for not just his clients, but also himself. “I like to work hard and study hard,” he said. “And when I train, it’s productive time which is also good for destressing and relaxing. It’s even better because I’m able to do it with a community of people.”

Truro resident Geraldine is in her 70s, and joined the club from its inception. Geraldine became a member because she was interested in being a part of a community and keen on pushing herself to be better at triathlon. She hails the club for being an inclusive and welcoming atmosphere that “combines top quality coaching with a strong sense of community.”

Conor, 27, also joined the triathlon club from the start after moving down to Cornwall in November last year. With no experience in triathlon, Conor praised Jake and his team for the thoughtfulness and planning that goes into each session, ensuring it caters to all abilities and age-groups. He also commended the club for contributing to a change in his lifestyle:

“I could never imagine waking up early on a Friday morning for yoga class, but now I love it.” he said. “It’s been great to meet people with similar interests, set new personal goals and enjoy exercise without it getting repetitive or boring at the Truro Triathlon Club.”

To find out more about the club or become a member, please drop Jake an email