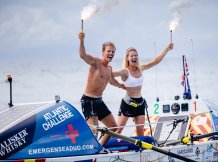 A husband-and wife emergency medicine doctor team have landed in the Carribean after rowing 3,000 miles across the Atlantic as the first ever married couple to participate in the Talisker Whisky Atlantic Challenge (TWAC). Following more than seven weeks of rowing, they finished 1st in the mixed pairs ranking and have, so far, raised more than £20,000 for frontline medical charities.

“Emergensea Duo” Charlie Fleury and Adam Baker are both emergency medicine doctors in Devon and took a sabatical to embark on the “World’s toughest row” that started on 12th December last year from the Canary Islands. In light of emerging evidence that females may be better adapted to outperform males over extreme distances, the pair aim to shed light on the changes in physiology and psychology between males and females in ultra-endurance events.

At 15:45 UK time on Tuesday, 1st February, the pair made it to the finish line as one of 36 starter teams from around the globe, coming 25th in the total ranking.

Charlie said: “This has been such a tough challenge with so many highs and lows. There aren’t many ultra-events that last longer than 7 weeks and have such a variety of weather conditions to tackle. The highlight of the journey was definitely seeing a pod of orcas. Three from the pod came alongside the boat and it was truly magical.”

On their journey, the pair struggled with seasickness, low energy (especially when their favourite snacks ran out) and even hallucinations. The exhausting temperatures and weather conditions put a strain on them, too. Periods of counter currents made it hard to progress, and one night a strong headwind meant they had to deploy the para-anchors and lock themselves up for eight to nine hours, both squeezed in the small cabin for one person.

Adam said: “We’re so delighted that we’ve made it through this adventure, with all its highs and lows. Our ultra-challenge journey really started by completing the Master’s in Extreme Medicine at the University of Exeter, which helped us develop our skills as emergency medicine doctors to become extreme rowers. It’s an experience we’ll never forget.”

“The height of the waves was sometimes frightening, and at one point we even had a large shark follow the boat which was quite intimidating, but it was incredible to be so close to ocean wildlife.”

The pair saw whales, dolphins and two pods of orcas, one of them with a calf. They said it was amazing to have two birds with them throughout their journey and a shoal of very large fish following them for weeks, not to mention the beautiful sunsets and starry skies.

They even met some fellow humans when they were passed by a cruise ship and several yachts, and the captains, crew and passengers on board cheered them on.

Professor Ian Fussell, Associate Dean of Education at the University of Exeter’s College of Medicine and Health, said: “We’re delighted that Charlie and Adam made it to the Carribean safely, and so proud they finished their adventure so successfully. It’s an incredible feat, and a great experience for them, and we look forward to seeing what insights they gain from their research.”

The pair did body composition measurements on landing, and they’re looking into analysing the data collected throughout their journey once they’ve settled back in on land. They’ll be travelling back to the UK shortly.

Charlie and Adam have both finished the unique Master’s programme in Extreme Medicine delivered in partnership between the University of Exeter and World Extreme Medicine, the world's leading provider of specialist training courses for medics taking their skills into challenging environments. Although other married couples have rowed the Atlantic before, they are the first married couple to have ever raced in the Talisker Whisky Atlantic Challenge that was first organised by Atlantic Campaigns in 2013.

They are still supporting frontline medical charities who encompass saving lives by air, land and sea; DAAT, RNLI, RD&E charity and Mind. You can help them reach their fundraising target of £100,000 by donating on their website.