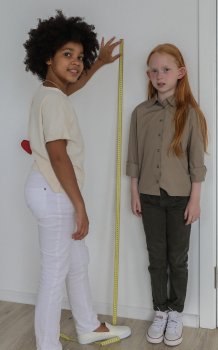 The study, an international collaboration by the Genetic Investigation of ANthropometric Traits (GIANT) consortium including the University of Exeter, analysed nearly 5.4 million individuals of diverse ancestries in the largest known genome-wide association study (GWAS) reported to date.

Adult Height is heritable and easily measured. Previous studies have shown that many genetic variants are associated with height, including genes responsible for skeletal disorders – especially in populations with European ancestry. Thus, height can be seen as a viable metric for assessing the role of genetic variation in the architecture of observable human traits.

The GIANT consortium identified 12,111 independent genetic variants significantly associated with height. The variants were found to be clustered close to genes already implicated with growth disorders. The research suggests that the genetic variants identified account for 40 per cent (%) of variation in height in populations with European ancestry, but only 10 – 20 per cent (%) in other ancestries.

Dr Andrew R Wood, co-author and senior lecturer in Statistical Genetics & Health Data Science at the University of Exeter, said: “We’ve been studying the genetics of variation in adult height for over a decade, identifying increasing numbers of common genetic factors. However, as with other common diseases and traits, theoretical models indicated we were not done in identifying the genetic factors associated with height.

The paper is entitled ‘A Saturated Map of Common Genetic Variants Associated with Human Height’ and is published in Nature.