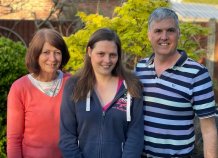 Sophie Tasker with her parents Nick and Jackie Tasker.

The University of Exeter’s world-leading diabetes research team has appealed for donations to continue a worldwide genetic testing programme which can dramatically improve lives for babies born with diabetes.

In the university’s first medical research crowd funder, the team is seeking to raise £100,000 to run the genetic testing programme for 500 children with neonatal diabetes, where diabetes is diagnosed in the first six months of life.  To help reach the target, funding raised will be matched by a donor, on a pound for pound basis up to the value of £50,000.

The genetic test will result in the cause of the diabetes being identified in over 80 per cent of children.  It is crucial to know the cause as soon as possible so that the child can get the best treatment and care for their diabetes and other associated medical problems.  In half of these children, finding the genetic cause of their diabetes will mean that they can replace insulin injections with sulphonylurea tablets, a cheaper and easier treatment which gives them better sugar control. In low and middle-income countries where insulin is expensive and in short supply, this genetic diagnosis can be lifesaving.

For the past 17 years, the Exeter genetics team has provided a genetic testing service to anyone diagnosed with diabetes before the age of six months using research funding from the Wellcome Trust. The purpose of the funding was to identify genes that cause the condition, which was successful, but now the team needs a fresh funding source to continue the diagnostic service. While this is offered for free on the NHS in the UK, it would be beyond the reach of more than 3,000 patients from over 100 countries who have received a genetic diagnosis from Exeter to date.

The programme builds on a ground-breaking discovery in 2004-6, when research led by Professor Andrew Hattersley, CBE at the University of Exeter, found that around half of people with neonatal diabetes had causes that could be treated more effectively with tablets than with the previous standard treatment of regular insulin injections.

Professor Hattersley said: “Switching from regular insulin injections was life-changing for these people, who had been on insulin all their lives - many described it as a ‘miracle treatment’. The genetic testing service we provide at Exeter is absolutely essential for ensuring these children born with diabetes get the best possible treatment wherever they are in the world.  No one should be denied this testing, wherever they are born“.

“By supporting this crowdfunding campaign, you will be making a huge impact on children’s lives. Those who can switch to tablets have much better control of their glucose, preventing dangerous complications in children.”

Neonatal diabetes is a genetic form of diabetes and by testing blood samples, the genetic cause of diabetes can be identified in 82 per cent of all people. This informs treatment decisions, determines the risk of future children within families being affected by the condition and shows if additional complications such as liver disease are likely to develop.

The cost of one blood test stands at £200, and with this the experts can tell a family which gene is causing their neonatal diabetes. If the test identifies that the child can be treated with tablets rather than insulin, they can immediately transfer from insulin to tablets.

Sarah Flanagan, Associate Professor in Genomic Medicine and Sir Henry Dale Research Fellow at the University of Exeter, said analysing the samples collected through the genetic screening programme also provides important insights into how insulin is secreted, which can help advance research into both type 1 and type 2 diabetes. Most importantly, it will help children diagnosed with neonatal diabetes directly.

Professor Flanagan said: “In lower income countries, access to insulin is often restricted and too expensive, and limited economic resources make it difficult to control blood glucose. It would make such a big difference and could save many children’s lives if they could change to a treatment with tablets rather than insulin injections, and we really hope that together we can fund testing for at least 500 children in our programme. Any donation, big or small, is highly appreciated and will make a huge difference to the lives of these children.”

Nurse Emma Matthews was living a nightmare of round-the-clock fear for her son’s life, until he switched treatments for his neonatal diabetes in 2004.

Emma had feared her beloved five-year-old, Jack Neighbour, may not live to see his sixth birthday. He was prone to regular attacks known as hypos, which would leave him collapsed on the floor, and he had never spoken a word, and communicated with his family through picture cards.

It all changed when analysis by the team at the University of Exeter Medical School pinpointed the genetic misprint which caused his neonatal diabetes. Just six weeks later after switching treatment, he delighted his family by uttering his first words: the simple phrase "hello, mummy".

Emma, from Leigh-on-Sea in Essex, said: “I can honestly say that getting the right diagnosis from Exeter saved Jack’s life. It was absolutely transformative. We went from our lives being a horror film to living in a rom com. I’m so grateful, and I’d really encourage people to donate to continue this incredible important, lifesaving work.”

Since he was a baby, clinicians had assumed that Jack should be treated with insulin because his body no longer produced its own. The Exeter group tested for the precise cause of this lack of insulin, and found that he had a mutation in a potassium channel and so could switch to tablets, which was an easier and more effective treatment.

The treatment, pioneered in Exeter, made Jack’s diabetes far easier to control, and family life was transformed from a “living nightmare” to a home filled with laughter. Jack, now 21, no longer has to have his finger pricked up to 15 times a day to check his volatile blood sugar levels.

Ms Matthews recalled her anguish. “We’d wake up in the night with Jack completely manic because his blood sugar level was so high, or in convulsions on the floor because it was so low. We couldn’t take part in normal activities because we had to take so much medication and bags of sugar, to account for any eventuality. It was a living nightmare and we were all absolutely shattered.”

“Within just a few weeks, it became obvious that Jack’s blood sugar levels were really stable. He had stopped collapsing on the floor and he suddenly started smiling and laughing. He turned into a really happy little chap. Jack will always have severe special needs, but now his diabetes just isn’t an issue. For us, it really was a miracle.”

Neonatal diabetes is diagnosed within the first six months of life, and can be associated with complications such as severe learning difficulties or epilepsy. It is caused by a change in a gene which affects insulin. This means that levels of blood glucose (sugar) in the body rise dangerously high.

Today, Jack’s diabetes is so well managed that Emma has not had to worry about his condition since he changed treatment. Emma said: “The Exeter team has helped my son grow into the wonderful young man he is today. By funding this programme, you will be transforming young lives directly.”

Nick and Jackie Tasker, who live near Taunton in Somerset, were first told that their daughter Sophie had diabetes when she was just three months old. Life became a carefully scheduled cycle of insulin injections and blood tests which left her thighs covered in bruises, and family pleasures such as eating out or taking a holiday were out of the question.

Sophie said: “I had to be really careful about what I ate, and I was always bruised. I felt self-conscious about taking my insulin - if we were in public, I’d inject myself under the table.”

At 18, Sophie was one of the first people in the country to be diagnosed by the Exeter team. Switching from insulin to tablets made a dramatic difference to her health. Now 32 and a welfare officer at a school for children with special needs, she said life was much improved. Sophie said: “It’s fantastic – I feel much more relaxed and I can be far more independent because I don’t have a risk of collapsing with low blood sugar.”

Mr Tasker, a retired lecturer, said: “We’ve never looked back since that first diagnosis. Our lifestyle is far more flexible. When Sophie was a baby, we had to weigh her food to the nearest gram – now she can eat what she likes, when she likes.

“I’d really encourage people to donate to this research. It made a tremendous difference to our lives, and has enabled Sophie to be far more independent. Supporting this research really helps young people to achieve their potential.”