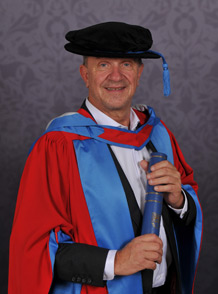 A global expert in extreme medicine has been awarded an honorary degree.

Intrepid explorer Mark Hannaford was honoured for his work in making global adventuring more accessible and safer. He is founder of Across the Divide, which works to facilitate mass participation in global adventure challenge expeditions. He also founded World Extreme Medicine, which provides remote medical training courses.

Mark received an Honorary Doctor of Science degree on Saturday (December 11). It adds to his accolades, after he was named the inaugural Honorary Associate Professorship of Extreme Medicine by the University of Exeter in 2019.

Mark said: "The growth of extreme medicine over the past two decades into a medical sub-discipline has been extraordinary, and at no point in the recent past has the worth of this type of development been more evident.  This approach provides us with clinicians able to work across different disciplines, problem solvers who have gained experience of working in public health breaks such as Covid-19 and Ebola, sudden-onset disasters and under extremes of pressure.

“We couldn't have achieved what we have achieved without the fantastic support of Exeter’s brilliant medical school or organisations like NASA, Doctors without Borders, UK Special Forces, and so many others,

“I’m incredibly honoured to be receiving this award. However, my feeling is that I am collecting this honour on behalf of all of my colleagues and members of the extreme medicine community, who have worked tirelessly with indefatigable energy developing this versatile much-needed field of medicine.”

Alongside his busy work commitments, Mark continues to embrace his passion for adventure and travel by undertaking significant expeditions overseas. In 2018 Mark was one of three expeditioners who were the first people outside of the local indigenous population to transverse the ancient trade route of Ethiopia's Amhara tribe, stretching 120 km across varying terrain at very high altitude, without in-country rescue facilities. Previously, Mark recorded a first complete descent of the Kuiseb River in the Namib Desert, part of a series of expeditions over several years, which took him across  five continents at least four times.

Professor Ian Fussell, Associate Dean of Education at the University of Exeter Medical School, said: “Mark is a visionary and an ambassador for extreme medicine worldwide, and I’m thrilled to see him receive this award. Congratulations to all our graduates – we’re so proud of you all.”

Professor Lisa Roberts, Vice Chancellor of the University of Exeter. She said: “I’m so proud of the outstanding calibre, commitment, vision and resilience shown by all our incredible graduates. Gaining these academic qualifications is always a huge challenge, and to do so during a pandemic is really phenomenal. Thanks to everyone in our University community who works so hard towards this goal.”