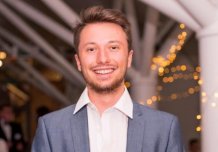 He got his first exposure to the Exeter labs at the age of just 17, and now Merlin Davies is the lead author of a major research paper that attracted media attention around the globe.

The 23-year-old PhD student is a true “home-grown” scientist, after having made first contact with the University of Exeter in a research project at school, undertaken by Professor of Molecular Genetics Lorna Harries. The project helped inspire him to study a degree in Medical Sciences at Exeter, and he is now working as part of Lorna Harries’ team, having just led a study on COVID-19 with significant media coverage.

Merlin’s study found one in ten people may still be infectious for COVID-19 after ten days, just as the self-isolation period was cut again in England. The research funded by Animal Free Research UK used a newly adapted test to detect whether the virus was potentially still active, and suggests that some people retain clinically relevant levels of the virus for up to 68 days. This could be particularly helpful in settings where people are vulnerable, to stop the spread of the disease.

Merlin said: “It feels great to be able to make such an impact at this early stage of my research career. Our findings will influence decisions made clinically regarding COVID-19 cases, particularly for healthcare workers returning to the frontlines and care home patients being able to return to their residencies.

“I’m delighted that I got the opportunity at the University of Exeter to lead on this study and publish my first ‘first-author’ paper which is vital to building my early career as a researcher. I love what I do, and I’d say it’s the first of many papers to come.”

Growing up in Bovey Tracey, Devon, Merlin got keen to go into the medical field when he was 15 years old and diagnosed with type 1 diabetes. “I started to question everything related to the human body and found it really interesting working out what was going wrong to create my condition and how the treatment with insulin corrected it. It also made me very interested in other diseases.”

“I was originally planning to go down the Medicine degree route and become a doctor, but taking part in a University research project at school showed me that research is another valuable part of the system.”

In 2015, Professor Lorna Harries started a large Citizen Science project that gave school students a taste of real life research and looked into the prevalence of BPA, a potentially hazardous chemical often used in plastic food packaging, in teenagers’ bodies.

“I was very keen and kept asking Lorna questions and sending emails. I fulfilled exactly what that study aimed to do, which was making people interested in research by helping them carry it out.”

Both the insights and the connections he gained from the project led to Merlin’s decision to study Medical Sciences at the University of Exeter. The Bachelor of Science degree prioritises the science that underpins medicine and clinical practice and prepares students to translate scientific discoveries and technological advances into improved healthcare. It provides small-group sessions, lectures and hands-on laboratory practicals, and also offers the opportunity of a Professional Training Year.

Merlin says: “What drew me most to do the course in Exeter was the support I knew I would be getting, and that it would be a launching pad for everything. I’m very open, and I like to say ‘yes’ to things, and from my experience with the University and Lorna throughout the outreach project I was sure I’d get many opportunities to develop myself in Exeter. I was, for example, able to spend some time in Lorna’s team on a summer project.”

Beside the teaching network, it was also the Exeter alumni community that supported Merlin significantly. He was initially awarded a Tony Allen Scholarship to help him during his undergraduate degree in Medical Sciences. It’s awarded every year to the three highest achieving Senior Scholars living in Devon and was established in 2010 by alumnus Tony Allen (Physics, 1965) to ensure talented local students would be able to benefit from coming to Exeter.

After Merlin’s graduation, the kind support of an anonymous donor has meant that Lorna Harries was able to offer him a PhD studentship and an opportunity to become involved in the University’s COVID-19 research, leading to his recent paper.

Merlin said: “I’m now probably the closest the University comes to the definition of a 'home-grown' scientist, and I cannot thank the donors enough for their support. Their kind donation is enabling real action on important issues like the recent pandemic, and it gives me the opportunity to pursue a career in science. I feel like everything that's happened to reach here is stars align.”

Next, Merlin and the study team will look at how cellular ageing and conditions like high glucose affect the immune response to COVID-19, and whether they can improve the response with chemicals that are known to improve cellular ageing.

Lorna said: “We’re so proud of Merlin and how far he has come already in his early research career. It’s so rewarding to see how he’s developed from a curious teenager doing his very first steps in research, to the lead author of this major paper, and we’re delighted we were able to support him along the way. He’s become such an asset to our team, and we look forward to continuing working with him, and to his next achievements.”

Dr Emma Taylor, Programme Director of the BSc Medical Sciences degree programme at the University of Exeter, said: “We’re delighted that Merlin has chosen to continue his academic journey with us here in Exeter, and it’s great to see him getting on so successfully after he graduated from our Medical Sciences degree. He’s a great example to our current students of what can be achieved with curiosity and commitment, alongside excellent mentoring and support from academics such as Professor Harries and her team.”