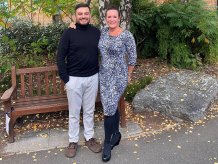 Two nurses have received a prestigious award to recognise their outstanding contribution to human rights and care, at an international conference about ethics in care during COVID-19 hosted by the University of Exeter.

Deanna Mezen and Ricardo Ayala are the winners of this year’s Human Rights and Nursing Awards. The awards are presented to two exemplary nurses each year, to give nurses visibility and celebrate their commitment and work to foster international respect for human rights and dignity of people everywhere in the world.

Deanna Mezen is an advanced nurse practitioner at His Majesty's Prison Oakwood, in Wolverhampton, and received the award in recognition of her ground-breaking work enhancing end-of-life care for prisoners. In her daily nursing practice, Deanna also supports members of the transgender community and veterans in prison.  She has provided a model of international significance in relation to what can be achieved in relation to human rights and nursing in prisons.

When she learned of the award, she said: “I’m extremely honoured to receive such a prestigious award and am most grateful for the recognition of my work, winning this accolade would not have been possible without the inspiration and support I have received from my team and family. The award makes visible the unmet needs of marginalised people in prison, deserving of the best end of life care, and the contribution nurses can make to redress injustice.”

Ricardo Ayala first became interested in humanitarian law as a Red Cross volunteer in the early 1990s providing care during the earthquake in Chile in 2010.  He became a committed activist in the fight against human rights violations during the Chile social protests of 2019 and gained the attention of the international media in his call for institutions, such as the European Union, to raise their voices and make a stand for human rights in Chile. He was thus part of a movement that has promoted a process of significant police reform in his home country. Ricardo is widely recognised as an effective advocate for voiceless people, raising awareness of oppression. He has played a central role in projects on community care for indigenous women and the wellbeing of homeless people, as well as gender based inequalities, with particular reference to sexual minorities. Ricardo has highlighted the gender-based workplace violence of transgender nurses and works to expand health coverage for marginalised communities in Equador and Belgium and human rights for sexual minority groups from Afghanistan and Venezuela.

Ricardo is committed to advancing the role of nurses as human rights’ activists and to educating the public about human rights, addressing his large following on social media with over four thousand followers on Facebook. Ricardo is critical of care policies and institutional practices that oppress marginalised groups and aims to use the funding from the award to further his work to make the world to advance human rights for all.

The award ceremony is a highlight of the 22nd International Nursing Ethics Conference on 14th October on the theme of ‘Ethics, Care and Climate Change’ (link here - http://nursing.exeter.ac.uk/events/conferences/ethics-care-and-climate-change/

Professor Ann Gallagher, Head of Nursing at the University of Exeter and Editor-in-Chief Nursing Ethics, said: “It’s a privilege to host the awards at our conference at the University of Exeter. The ceremony enables us to celebrate the contributions of nurses to human rights and the flourishing of individuals, families and communities everywhere in the world. Deanna and Ricardo are excellent role models for student nurses and care-givers globally and show us what can be achieved when nurses are committed to human rights. We are grateful to the anonymous donors who contribute to the awards, making it possible for the recipients to progress their important work.”