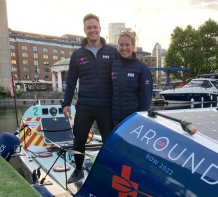 A married couple of Emergency Medicine Doctors have begun a new challenge rowing around Great Britain for charity just three months after completing an epic 3,000-mile row across the Atlantic.

Known as the “Emergensea Duo”, Charlie Fleury and Adam Baker are both Emergency Medicine doctors in Devon, and alumni of the University of Exeter’s Extreme Medicine masters programme. The programme equips health professionals to take lead roles and deliver high quality healthcare on expeditions in some of the world’s most remote and challenging landscapes.

Earlier this year, the pair embarked upon and finished 1st in the mixed pairs ranking, and became the first husband and wife team to finish, in another rowing challenge across the Atlantic.

Adam said: “The row itself has been incredibly challenging so far. We have to strategically plot each leg taking into consideration the wind speed and direction and the tidal streams. There’s also a lot more to hit! It’s such an incredible way to see the UK coastline and we’re looking forward to some sunnier days!”

Now, the couple hope to build upon their fundraising success in rowing the entire British coastline. Starting from Tower Bridge, London, rowing through and out of the river Thames and travelling the British coastline clockwise, they will complete a full circuit of 2,000 miles. Both rowers will burn 5,000 calories and consume more than six litres of water a day.

The row is independent and completely unsupported, meaning essentials such as water will be made and kept on board.

Charlie said: “The extremes in pace are challenging, one minute you’re sprinting to get to your waypoint in time and the next you’re waiting on anchor for days with no option but to be patient.”

The husband-and-wife team embark on this new challenge just three months after rowing across the Atlantic in December, which saw them row 3,000 miles over seven weeks and raise over £25,000. This is their second ultra-endurance event so soon after their first, making this feat even more challenging.

Only two pairs teams have completed this row but no mixed pairs have done so yet.

The duo have a fundraising target of £100,000 and proceeds will go to frontline medical charities close to their hearts which encompass saving lives by air, land and sea; Devon Air Ambulance, RD&E Hospital Charity, the RNLI and Mind.

To donate and track the couple’s progress, visit here.