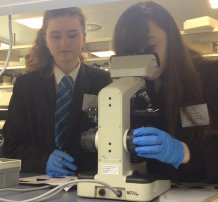 Pupils from Westcountry schools used genetic processes commonly seen in TV crime dramas to help solve the mystery of who is sabotaging Devon’s very own Bake Off.

Year 9s from Devon, Dorset and Somerset got hands-on with scientists in University of Exeter Medical School laboratories in British Science Week, when they used state-of-the-art microbiology and DNA analysis techniques to unravel a scandal which had erupted in the “Great Bideford Bake Off”.

The scenario involved an outcry as the Westcountry’s most talented bread makers ended up with soggy bottoms as their loaves failed to rise, and the spoiled bread tasted mysteriously sugary. Who had introduced a mutant yeast to rig the contest?

The pupils made up a crack team of nearly 200 science sleuths, known as the Men in White. They worked with special operatives from the University of Exeter Medical School on 15 and 16 March. They needed all their genetics genius to identify which of three supervillains was guilty.

Chloe Somerwill, 14, from Clyst Vale Community college in Broadclyst, near Exeter, said: “It's a really good day. It shows what it's really like to go into a career in science. It's all very well learning about it at school but seeing it in the lab gives it a whole different context.”

Now in its twelfth year, the Medical School’s popular outreach event engages Year 9s from 14 schools. The plot sees pupils stain yeast DNA on slides and examine them under microscopes to find the mutant strain, as well as trying out clinical procedures such as blood sugar sampling and blood pressure testing to learn more about their bodies.

For the first time this year, the event took place in the Medical School’s new laboratories in the Research, Innovation, Learning and Development (RILD) building on the Royal Devon & Exeter Hospital site.

Professor Lorna Harries, one of the organisers of the event, which aims to make science more accessible, said: “This is a fun, interactive way to gain a real understanding of some complex scientific concepts. The pupils work alongside real scientists, and we want to bust some myths that we’re all fuddy-duddy men in white coats.”

Alicia Wideman, Science Teacher at Newton Abbot College, said: “It's an amazing opportunity for students to get hands-on experience with authentic scientific tools. Getting into the lab means accessing a different world to what we can teach in the classroom. It opens their eyes to careers and ways of working that they never knew existed.”

Paul Hocking, Assistant Principal at Torquay Academy, said: “It's a great event. It enables pupils to see science as a viable pathway. Coming from an area in which only 14 per cent of people go to university - much lower than the national average - it really helps raise aspirations.

“Students love it and give very positive feedback on the day. It really encourages them to think about an undergraduate programme.”

Co-organiser Dr John Chilton said: “It’s critical that we motivate the next generation of Devon-bred scientists to consider a career in a stimulating and innovative subject at the cutting-edge of discovery. Our relocation to RILD means we can welcome more pupils than ever before this year. Who knows - some of these them may one day come and join our world-leading research team here at Exeter.”