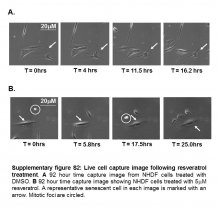 A new way to rejuvenate old cells in the laboratory, making them not only look younger, but start to behave more like young cells, has been discovered by researchers at the Universities of Exeter and Brighton.

A  team led Professor Lorna Harries, Professor of Molecular Genetics at the University of Exeter, has discovered a new way to rejuvenate inactive senescent cells. Within hours of treatment the older cells started to divide, and had longer telomeres - the 'caps' on the chromosomes which shorten as we age.

This discovery, funded by the Dunhill Medical Trust, builds on earlier findings from the Exeter group that showed that a class of genes called splicing factors are progressively switched off as we age. The University of Exeter research team, working with Professor Richard Faragher and Dr Elizabeth Ostler from the University of Brighton, found that splicing factors can be switched back on with chemicals, making senescent cells not only look physically younger, but start to behave more like young cells and start dividing.

The researchers applied compounds called reversatrol analogues, chemicals based on a substance naturally found in red wine, dark chocolate, red grapes and blueberries, to cells in culture.  The chemicals caused splicing factors, which are progressively switched off as we age to be switched back on.  Within hours, the cells looked younger and started to rejuvenate, behaving like young cells and dividing.

The research  Small molecule modulation of splicing factor expression is associated with rescue from cellular senescence, is published in the journal, BMC Cell Biology, https://bmccellbiol.biomedcentral.com/articles/10.1186/s12860-017-0147-7 .

The discovery has the potential to lead to therapies which could help people age better, without experiencing some of the degenerative effects of getting old. Most people by the age of 85 have experienced some kind of chronic illness, and as people get older they are more prone to stroke, heart disease and cancer.

Professor Harries said:  “This is a first step in trying to make people live normal lifespans, but with health for their entire life. Our data suggests that using chemicals to switch back on the major class of genes that are switched off as we age might provide a means to restore function to old cells.”

Dr Eva Latorre, Research Associate at the University of Exeter, who carried out the experiments was surprised by the extent and rapidity of the changes in the cells.

“When I saw some of the cells in the culture dish rejuvenating I couldn’t believe it. These old cells were looking like young cells. It was like magic,” she said. “I repeated the experiments several times and in each case the cells rejuvenated. I am very excited by the implications and potential for this research.”

As we age, our tissues accumulate senescent cells which are alive but do not grow or function as they should. These old cells lose the ability to correctly regulate the output of their genes. This is one reason why tissues and organs become susceptible to disease as we age. When activated, genes make a message that gives the instructions for the cell to behave in a certain way. Most genes can make more than one message, which determines how the cell acts.

Splicing factors are crucial in ensuring that genes can perform their full range of functions. One gene can send out several messages to the body to perform a function – such as the decision whether or not to grow new blood vessels – and the splicing factors make the decision about which message to make. As people age, the splicing factors tend to work less efficiently or not at all, restricting the ability of cells to respond to challenges in their environment. Senescent cells, which can be found in most organs from older people, also have fewer splicing factors.

Professor Harries added: “This demonstrates that when you treat old cells with molecules that restore the levels of the splicing factors, the cells regain some features of youth.  They are able to grow, and their telomeres - the caps on the ends of the chromosomes that shorten as we age -  are now longer, as they are in young cells. Far more research is needed now to establish the true potential for these sort of approaches to address the degenerative effects of ageing. ”

Professor Richard Faragher of the University of Brighton, will today argue for more research into the degenerative effects of ageing in a debate into whether science should be used to extend people’s lifespans.

“At a time when our capacity to translate new knowledge about the mechanisms of ageing into medicines and lifestyle advice is limited only by a chronic shortage of funds, older people are ill-served by self-indulgent science fiction.  They need practical action to restore their health and they need it yesterday,” he said.

Professor Faragher added:  “Our discovery of cell rejuvenation using these simple compounds shows the enormous potential of ageing research to improve the lives of older people”