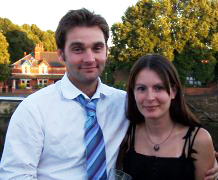 A new research-backed risk assessment tool will support GPs in identifying the symptoms of bowel cancer and inflammatory bowel disease in patients aged under 50.

The research and the assessment tool is led by the University of Exeter, in partnership with Bowel Cancer UK Never Too Young campaign, Durham University and University Hospital of North Tees.

The assessment tool will calculate the risk of the patient’s bowel symptoms allowing the GP to decide whether they need further tests. This is the first of its kind for younger people and aims to speed up the diagnosis of patients under 50 who often experience significant delays.

Emma Matthews, from Newquay in Cornwall, whose husband Martyn died aged 34, after waiting a year for a cancer diagnosis, welcomed the news. Emma’s father, David Hobbs, 63, also has bowel cancer, and is in remission after doctors caught and treated it early.

Emma said: “I really welcome this new diagnosis tool to help clinicians identify bowel cancer in younger people. Martyn’s death broke my heart. He was so positive throughout and fought so hard to survive. It was soul destroying to see him suffer and to lose him.

“I’m so relieved that my dad’s outcome is looking more positive, and of course I wonder if Martyn would have still been with us if he’d been diagnosed earlier. It would certainly have given him a fighting chance.”

Every year in the UK, more than 2,500 under-50s are diagnosed with bowel cancer, a 45 per cent increase since 2004. Across all ages, 13,000 people are diagnosed with inflammatory bowel disease, of which many are under 50, and both of these diagnoses are increasing worldwide, including in the UK.

Symptoms of these conditions are common and account for one in 12 GP appointments, but given that most of the symptoms will not be caused by cancer, it can be difficult for GPs to determine which patients need further tests. As a consequence young people often face a delay in their diagnosis, reducing their chance of survival significantly.

Nearly 98 per cent of people will survive bowel cancer for five years or more if detected early, at stage one, compared with less than one in ten people diagnosed later, at stage four. In addition, Bowel Cancer UK research shows that nationally, three out of five people diagnosed under the age of 50 will be at stages three or four, with a third (34 per cent) being diagnosed in an emergency situation, for example in A&E. This means that many younger people have a lower chance of survival than they should.

The bowel cancer and inflammatory bowel disease risk assessment tool, published in the British Journal of General Practice and funded by the Department of Health, aims to support GPs to determine which patients need further tests by predicting the level of risk depending on the patient’s symptoms. Using symptoms, a physical examination and blood test results, the tool calculates the risk of a serious disease with a percentage, as well as suggesting next steps:

Willie Hamilton, Professor of Primary Care Diagnostics at the University of Exeter Medical School, who led the research, said: “The risk assessment tool should be used as a reminder to GPs to consider the likelihood of an individual patient having a serious bowel condition given the symptom or combination of symptoms they present with. The tool does not replace clinical judgement but provides more information to base a referral decision.”

Deborah Alsina MBE, Chief Executive, Bowel Cancer UK, said: “As the numbers of under-50s affected by bowel cancer and bowel disease continues to rise, research is fundamental in finding better ways to diagnose people early when treatment is likely to be more successful.

“We launched our flagship Never Too Young campaign in 2013 to highlight the experiences of young people for the first time and to improve their diagnosis, treatment and care so that more lives are saved. Delayed diagnosis is all too common for young patients with both bowel cancer and inflammatory bowel disease therefore finding quicker, more effective ways to identify and diagnose these patients earlier is crucial. Our research shows that one in five young patients have to visit their GP five times or more before they get their diagnosis and this is simply not acceptable.

“This important research has the potential to help GPs to decide which of their young patients need a referral for further tests and which have less serious bowel conditions. However this is just the start, the next step is to ensure that all GPs across the UK have access to this potentially life-saving tool as part of their day to day practice.”

Her husband, Martyn Matthews, was misdiagnosed for a year, despite pleading with doctors to investigate for cancer. When he was eventually told he had bowel cancer in 2012, it was already too late for Martyn. He died in October 2014, aged 34.

In contrast, Emma’s father David Hobbs, 63, was told he had early stage bowel cancer when doctors investigated a small heart attack. Doctors found an ulcer and investigated further, quickly diagnosing cancer. He had surgery and, six years later, is now in remission.

Emma, 36, who lives in Newquay in Cornwall, said: “For a year before he was diagnosed, Martyn knew he had a serious problem. In 2011 he asked several doctors if it could be cancer but they all said they were almost certain it wasn’t. They just didn’t recognise it as a serious risk because he was so young.”

Three months after Martyn received his diagnosis, Emma married her well-known and popular partner, who worked as a heavy plant mechanic. She now raises awareness of the importance of being diagnosed with bowel cancer earlier in life.

“I really welcome this new diagnosis tool to help clinicians identify bowel cancer in younger people. Martyn’s death broke my heart. He was so positive throughout and fought so hard to survive. It was soul destroying to see him suffer and to lose him. I’m so relieved that my dad’s outcome is looking more positive, and of course I wonder if Martyn would have still been with us if he’d been diagnosed earlier. It would certainly have given him a fighting chance.”

Emma, who works in communications for Cornwall Fire and Rescue Service, said: “Seeing Martyn go through his treatment has really scared me. I live in fear of getting bowel cancer myself, and I will find it hugely reassuring that better systems are put in place to diagnose earlier. It will make a massive difference – catching cancer early can mean the difference between life and death.”

Emma has set up a website in Martyn’s memory at: www.memoriesofmarty.co.uk