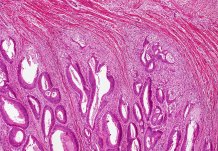 More than a third (34%) of women with bowel cancer in England were diagnosed after an emergency hospital visit compared to less than a third of men (30%).

The finding comes despite women having more red flag symptoms and more visits to their GP, according to research presented at the National Cancer Research Institute (NCRI) Cancer Conference in Liverpool.

If diagnosed after an emergency hospital visit, patients are more likely to have poorer survival as the disease is usually at an advanced stage.

Data from 2799 women and 2946 men diagnosed with bowel cancer in England between 2005-2010, was analysed by researchers from University College London, the London School of Hygiene & Tropical Medicine and the University of Exeter and funded by Cancer Research UK and the British Medical Association.

Of the women diagnosed as an emergency, one in five (20%) had alarm symptoms such as a change in bowel habits or rectal bleeding the year before the emergency diagnosis compared to fewer than one in six (14.5%) men.

Dr Cristina Renzi, one of the lead researchers based at UCL, said: “This study suggests that it’s more difficult to pick up bowel cancer in women than men, since female tumours are often located in a part of the bowel which means symptoms can be confusing. IBS is also more common among women and shares many of the same symptoms as cancer.”

Professor Willie Hamilton, Professor of Primary Care Diagnostics at the University of Exeter Medical School said: “This paper is important, as patients whose colorectal cancer is diagnosed after they have developed complications do much worse. We found this happened more often in women, and that some of these women had a diagnosis of irritable bowel syndrome (IBS) shortly before the emergency. Of course, IBS is common – and real – but we GPs need to be vigilant when making that diagnosis, and to at least consider whether it could be a misdiagnosis.”

Dr Richard Roope, Cancer Research UK’s GP expert, said: “Bowel cancer can be difficult to diagnose because it can share symptoms with diseases other than cancer. The most common symptom recorded for women in the study before they were diagnosed with cancer was stomach pain, which is usually associated with other women’s health conditions. This could explain why some men were diagnosed with colon cancer earlier, as stomach pains don’t have as many alternative explanations for men as they do for women. Sometimes diagnosing cancer is a process of elimination, so other conditions need to be eliminated first which means a longer wait for a cancer diagnosis.

“A lot has changed since the data used in this study was collected. GPs have been given new guidance to recognise and refer suspected cancers, and work continues to raise public awareness of cancer symptoms. Emergency diagnoses remain an issue though and efforts to improve this must continue.”

To read the full article, “Gender inequalities in emergency colon cancer diagnosis: A longitudinal data-linkage study in England on pre-diagnostic clinical history and healthcare use”, please click the link here.