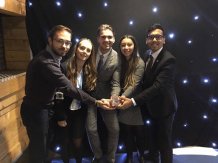 A group of Medical students have won a national award which celebrates Management and Leadership.

The award was presented to the 2016-2017 committee of the Exeter Medical Leadership and Management Society (ExeMLM), and was due in part to their work setting up the largest ever student-run “National Pathology Week”, which was backed by a public engagement grant from the Royal College of Pathologists.

The ExeMLM committee was awarded the prize by Alternative Docs, which is a global network which aims to support the professional development of healthcare professionals worldwide.

Bodgan said he was “delighted” to win the award. “It gives us great pleasure to be awarded this national prize for Leadership and Management. Training to be a doctor is academically challenging, and can be stressful at times.

“For us, this society, a family of enthusiastic medical students who share the same passion for adding value through teaching, raising awareness, and ultimately bridging the gap between students and the nearby community, has become a way of coping with stress.

“The projects we have set up over the years have kept us motivated to excel academically and personally as part of a prestigious medical school. I am delighted to see the new committee leading this movement forward and I do hope to see more students getting involved in such initiatives.”

The award comes after Bogdan and Navin were named Student Leaders of the Year (2017) at the University’s Guild Awards.

This academic year, Daisy, a second year Medical Student, has been appointed President of the ExeMLM. The committee has already secured a public engagement grant from the Royal College of Pathologists, to host another “National Pathology Week”.