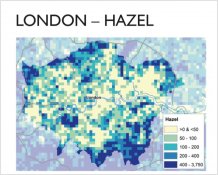 A hay fever map of Britain – with the first ever guide to the location of plants in the UK that can trigger the allergy – has been produced to help sufferers cope, and warn them which ‘hotspots’ to avoid.

Academics at the University of Exeter’s Medical School have produced new, highly-detailed maps of the UK containing the location of key plants and trees known to produce pollen that triggers allergies and asthma.

The maps, produced in collaboration with the Met Office, may help acute hay-fever or asthma sufferers decide where to live, or which areas to avoid at peak times when pollen is released.

The study records areas where plants which hay fever sufferers are most likely to be sensitive to are most prevalent, including grasses and trees and plants such as birch, alder, oak and nettle.

The plant maps, which include cities throughout the UK – with a detailed plan of London - will help medics further study the impact of air pollution on asthma.

Around 80 per cent of people with asthma also have a pollen allergy and in the UK around 10 per cent of the adult population is affected by asthma - one of the highest levels of doctor-diagnosed asthma in the world.

In 2001, thirteen per cent of people in the UK were diagnosed with hayfever by doctors.

Most people with hay fever are allergic to grass pollen, which is most common in late spring and early summer. Air pollution, for example from car exhaust fumes, is understood to exacerbate hospital admissions for asthma caused by allergies.

The maps are released as new research carried out at the European Centre for Environment and Human Health at the University of Exeter’s Medical School shows that exposure to pollen can increase hospital admissions for asthma within days of exposure.

Dr Rachel McInnes and Dr Osborne of the European Centre for Environment and Human Health at the University of Exeter Medical School believe their maps of allergenic pollen-producing plants, combined with pollen forecasts and calendars, could help sufferers manage their condition by reducing their exposure.

The study examined the tree canopy, and the distribution of grasses to allow people to locate areas where they could be particularly affected. The resulting maps show where the allergenic plants and trees are located around Great Britain. The academics used sophisticated aerial mapping, as well as data from a variety of sources, to show the geographical distribution of the 12 key types of plants associated with hay fever and asthma brought on by allergies. In London, the prevalence of allergenic plants is broken down by neighbourhood.

The maps were produced in collaboration with the Met Office, as part of the multi-institutional and interdisciplinary Health Protection Research Unit in Environmental Change and Health funded by NIHR (National Institute for Health Research).

They include the location of grasses, weeds and trees producing pollen known to trigger hay fever and asthma, including birch, alder, hazel, plane trees and oak, grass, nettles and mugwort.

The detailed maps of the location of pollen, published in the journal Science of the Total Environment, may make it possible to identify plants increasing the risk of higher hospital admissions for asthma.

Research by Dr Nicholas Osborne, an epidemiologist and toxicologist, at the University of Exeter’s Medical School, said the maps will help doctors narrow down which pollens are most likely to trigger asthma attacks.

“We hope that these maps will contribute to ongoing research that aims to better determine when plants pollenate, allowing us with time to provide better warning to allergy and asthma sufferers to enable them to better manage their disease,” Dr Osborne said. “In the future, more people will know what species they are allergic to.”

The map of tree locations used data from a high-resolution National Tree Map produced by Bluesky International, which used high-resolution aerial photography and remote sensing, as well as information from the Forestry Commission.

Dr Rachel McInnes, an Honorary Research Fellow at the University of Exeter European Centre for Environment and Human Health and a Senior Climate Impacts Scientist at the Met Office, said:

"These maps are a step towards a species-level pollen forecast. Pollen can have a serious impact on the well-being of those with hay fever or asthma. By working towards a localised, species-level forecast, vulnerable people can better plan their activities and manage their condition. These new maps could also provide local authorities and healthcare practitioners with information to assist patients with pollen allergies. While these allergenic plant and tree maps do not provide a forecast of pollen levels, they do provide the most likely locations of grass and of tree species which are the source of most allergenic pollen."

Pollen exposure and hospitalization due to asthma exacerbations: daily time series in a European city is published in the International Journal of Biometeorology.

For all trees maps (the blue coloured maps of England and Wales) Images Crown Copyright, 2016, The Met Office. Based on data licensed from National Tree Map, Copyright Bluesky International Limited, 2016; digital spatial data licensed from the Centre for Ecology & Hydrology, copyright NERC (CEH); and contains, or is based on, information supplied by the Forestry Commission.

For grass map and all weeds maps (the green / pink coloured maps of whole GB): Image Crown Copyright, 2016, The Met Office. Based on digital spatial data licensed from the Centre for Ecology & Hydrology, copyright NERC (CEH).