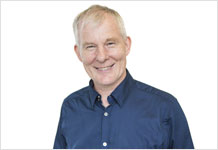 A world-leading diabetes expert has been awarded the CBE in the Queen’s birthday honours list for his work in revolutionising global diagnosis and treatment.

Andrew Hattersley, Professor of Molecular Medicine at the University of Exeter Medical School and a diabetes consultant at the Royal Devon & Exeter NHS Foundation Trust, has won a string of international awards for his work in combining genetic diagnosis with clinical treatment to make a real difference for patients with genetic sub types of diabetes across the world. Professor Hattersley and his colleague Professor Sian Ellard set up their molecular genetics laboratory in the Royal Devon and Exeter hospital to do both research and clinical diagnostic resting in 1995, and have built a team that has gained an international reputation for excellence.

Diabetes occurs in different forms. It was thought there were only the 2 main types –insulin treated Type 1 diabetes mainly diagnosed in children and young adults and diet and tablet treated Type 2 mainly diagnosed in middle and old age. The Exeter work has been key in showing there are also genetic subtypes where a change in just 1 of the 3 billion bits of genetic code can result in particular types of diabetes. These genetic types are hard to differentiate from the more common types but their recognition is important as they need different treatment. The laboratory in the Royal Devon and Exeter hospital is run by Professor Sian Ellard, who offers the testing for genetic diabetes for all of the UK and much of the world. So far, they have received samples from 89 different countries.

Professor Hattersley discovered that some babies with the sub-type neonatal diabetes – which is diagnosed before they are six months old - can be treated more effectively with a simple tablet than with daily multiple insulin injections. This discovery has changed international guidelines, and means these patients have better glucose control and better quality of life. In the last week they have received samples from England, Belgium, India and South Africa for this life changing diabetes test.

Professor Hattersley said: “I’m delighted and humbled to receive such a prestigious award. This recognises the outstanding contributions of my talented colleagues here at Exeter both in the diabetes and molecular genetics department at the hospital and in the research departments of the University of Exeter Medical School. I feel privileged to work with such an excellent team, whose work has benefited tens of thousands of people worldwide.”

Professor Sir Steve Smith, Vice-Chancellor and Chief Executive, said: “I cannot think of anyone who deserves such an honour more than Professor Andrew Hattersley. His internationally-renowned research into the genetic causes of diabetes has literally transformed the lives of thousands of patients worldwide through the development of innovative treatments. Andrew is without doubt one of the preeminent clinical scientists in the UK, who has made major contributions in his field, revolutionising treatment. Andrew also nurtures talent in the next generation of researchers. He and his team have trained academics who have won countless awards. The whole University community offers Andrew our heartfelt congratulations.”

Suzanne Tracey, Chief Executive of the Royal Devon and Exeter NHS Foundation Trust, said: “Andrew has played a pivotal role in the study and treatment of diabetes both here in Exeter and internationally and we are absolutely thrilled he has received this honour. His groundbreaking work reinforces how important the role of research is in delivering outstanding care to our patients and we congratulate him on his latest achievement.”