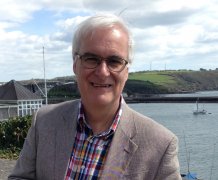 Professor Noel Morgan of the University of Exeter Medical School.

A world expert in diabetes will deliver a lecture presented as the top international science award by Diabetes UK.

Professor Noel Morgan, from the University of Exeter Medical School, will give the prestigious Dorothy Hodgkin Lecture at the Diabetes UK Professional today (Thursday 9 March).

The charity awards a number of prestigious lectures to diabetes researchers who are leading in the field, and the Dorothy Hodgkin lecture is their top international scientific award.

Professor Morgan and his team have made crucial advances in understanding the immune attack that happens in Type 1 diabetes and believes that this may not be the same in everyone.

Noel and his team’s work on pancreas samples from patients has revolutionised thinking about how the pancreas is destroyed in Type 1 diabetes patients throughout the world.

He plans to find out how immune cells interact with each other to coordinate the attack against insulin-producing cells in the pancreas. This knowledge is crucial if new treatments are to be developed to help stop or slow the development of Type 1 diabetes. Professor Morgan has recently received considerable funding from the major funders in the UK, Europe and America to support his work. This includes a grant of £164,000 from Diabetes UK for a project that will help us to understand how and why Type 1 diabetes develops, so that new treatments to stop it can emerge.

At this year’s conference, Medical School researchers Associate Professor Mike Weedon and Professor Andrew Hattersley will be announced as recipients of next year’s lectures.

Dr Weedon will present the RD Lawrence Award next year, given to the top UK young diabetes researcher. It is a sign of the excellent training and support given in Exeter to young researchers that this award has been won by Exeter trained researchers in 7 of the last 14 years. Indeed Mike has been mentored by Professor Tim Frayling who himself won this award in 2006. Mike works on the genetics of diabetes both the common Type 1 and Type 2 diabetes and also the discovery of rare single gene forms.

Professor Hattersley will present the Banting Lecture, the highest award bestowed by Diabetes UK, next year. Professor Hattersley and his team are internationally recognised for outstanding research into genetic forms of diabetes for which Exeter is now the world leading centre for diagnosis, clinical care, education and research.

A number of researchers have also been shortlisted for further awards, and winners will be announced during the conference. They are:

Anita Grubb – working on a new tool to best diagnose Type 1 and Type 2 diabetes in adults.

Alice Hughes – showing that how likely a mother has a big baby depends not only on the mothers’ glucose but also the genetics of the baby.

Dr Elizabeth Robertson, Director of Research at Diabetes UK, said: “It's great to see so many of Exeter's excellent diabetes scientists showcasing their work at the Diabetes UK Professional Conference. We’re really pleased to be funding Professor Morgan’s vital research into how and why Type 1 diabetes develops, part of a programme of new diabetes research across many important areas.

“By funding critical research like this, we’re bringing about life-changing steps in the care, treatment and prevention of diabetes. Ultimately, we want to reach a world where diabetes can do no harm.”

Watch a video of Professor Noel Morgan talking about his research