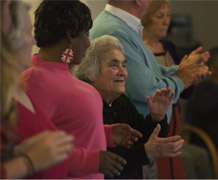 Researchers are seeking volunteers in Devon and Cornwall to take part in a research trial called Singing for People with Aphasia.

Researchers are seeking volunteers to help study the benefits of singing groups for people with a communication disorder associated with strokes.

Aphasia is a speech and language disorder caused by damage to the brain and it is thought that around one in three people who have had a stroke experience it to some degree.

People with aphasia can struggle to speak and often make mistakes with the words they use, sometimes using the wrong sounds or putting words together incorrectly. They can also experience difficulty reading and writing.

Researchers at the University of Exeter Medical School are now seeking volunteers in Devon and Cornwall to take part in a research trial called Singing for People with Aphasia (SPA) to determine whether group singing sessions can help reduce the impact the disorder has on people’s lives.

Dr Mark Tarrant, the project’s Research Lead said: “Aside from the difficulty with language, aphasia can have serious detrimental impacts on wellbeing; it often leaves people feeling quite isolated, lonely and lacking in confidence.

“We hope that singing groups will enable people with aphasia to meet and connect with one another, which will help tackle these psychosocial problems that often come hand-in-hand with the disorder.”

Dr Raff Calitri, the Trial Manager added: “Singing has been used as speech therapy for people who have suffered a stroke before. This research may help with that aspect of aphasia but we also hope that it will act as a social bonding exercise.

“I would really recommend anyone in Devon and Cornwall experiencing aphasia to consider taking part in this research trial. By doing so, you’ll help us to learn how to care for people with aphasia more effectively in the future and if this trial is successful, it could be rolled out nationally.”

Plymouth Music Zone (PMZ), a local charity specialising in the use of music as a tool to improve health and emotional wellbeing, has helped to develop the singing programme and will run some of the singing sessions.

Debbie Geraghty, Plymouth Music Zone's Executive Director, said: "This important trial feels especially timely off the back of the Creative Health report just published last week by the All Party Parliamentary Group on Arts and Health and Wellbeing which highlighted the vital role of the arts in impacting people's wellbeing.

“At Plymouth Music Zone we've seen first-hand over many years how people with conditions like aphasia can have their lives greatly enhanced by music. If this trial with the University of Exeter Medical School could lead to a national roll out of singing programmes for those living with aphasia then it would reach so many of those people who could benefit. We're excited to see how it unfolds and really hope people will feel encouraged to take part."

The researchers are looking for 48 volunteers to take part. Half of which will join 90-minute singing sessions once a week for 10 weeks in either Plymouth or Newton Abbot. Travel expenses to the sessions can be paid for.

All volunteers will be asked questions about the impact of their aphasia before, immediately after, and 6 months after the research, at their homes.

This research is funded by The Stroke Association and supported by the National Institute for health Research Collaboration for Leadership in Applied Health Research and Care South West Peninsula (NIHR PenCLAHRC).

For more information and to volunteer visit the website or contact Raff or Mary Carter (trial researcher).