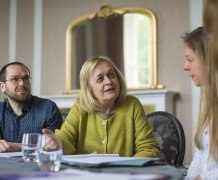 Professor Linda Clare is leading the Exeter Centre of Excellence

£2 million for Exeter Centre of Excellence in dementia care research

Alzheimer’s Society has announced today (Tuesday 20 June) that it has committed almost £2million to the University of Exeter, as part of its biggest-ever single investment in dementia care research.

The funding will be used for a national collaboration led by Exeter to improve both quality of life for people with dementia, and care in advanced dementia.

Professor Linda Clare, of the University of Exeter, who leads the research programme, said: “It is vitally important that people with dementia are able to have the best quality of life possible. The Centre of Excellence will support that urgent priority, and our research will significantly improve our understanding of what factors influence the ability to live well as the disease progresses. This will help us to develop strategies and initiatives that will make a real improvement for people living dementia and their families at different stages of their condition.”

The University of Exeter’s research grant will fund a second phase of a large-scale national study entitled Improving the Experience of Dementia and Enhancing an Active Life (IDEAL). Running since 2014, it aims to understand how to help people to live well with dementia by taking into account the experiences of people with dementia and their carers over six years.

The study is a collaboration with the universities of Cardiff, Brunel, Bangor, Newcastle and Sussex, and with King’s College London, the London School of Economics, the RICE centre in Bath and Innovations in Dementia CIC.

It comprises 1,570 people with mild-to-moderate dementia and 1,300 carers. The participants were interviewed by specialised researchers at their homes initially between 2014 and 2016 and then again after 12 and 24 months.

The expansion of the study includes adding the experiences of people from black and minority ethnic backgrounds and people in the advanced stages of dementia. At the end of the study the researchers will use their findings to set out guidelines for how to help people affected by dementia to have the best possible quality of life.

Exeter is also involved in a second Centre of Excellence bid, led by University College London.

Alzheimer’s Society Head of Research Development, Colin Capper, said: “Dementia is set to the 21st century’s biggest killer and there is currently no cure. People living with dementia have the right to the best possible care. Today we are laying the foundations for building networks of internationally recognised researchers in dementia care in the UK. We are making major investments that will contribute a great deal towards improving care and support for people affected by dementia.

We are excited at the potential that each of these Centres of Excellence hold for improving care and hope to establish further Centres over the coming years. These Centres are an excellent example of how being united against dementia, and listening to those affected, can bring about real and lasting change through high-quality, worldleading research. It presents a unique opportunity for collaboration with health and social care providers and policy makers.”

71-year-old Jane Barnes from Sidmouth was diagnosed with Alzheimer’s disease in 2015. She feels that it’s important to know what help is available for people to live well and remain active and independent following their diagnosis. She said: “Things haven’t really changed since I received my diagnosis. I think that’s a good thing. My friends and my husband are very supportive. That helps.

I don’t beat myself up if I don’t know the date. I don’t feel as though I’ve lost something by not getting the day or the date right. For me, maintaining the friendships with people I’ve known for a long time is essential. That continuity is helpful. I think it’s also imperative to keep on the move, and to socialise, even just going for a little walk feels beneficial. For me that helps improve my quality of life. After all, it’s better than being stuck indoors all day feeling sorry for myself. That would be soul destroying.”

Keith Oliver, from Kent, was a successful headteacher when he received a shock diagnosis of early onset dementia at the age of 54. He had to give up work after several months, and has adopted a range of strategies such as meticulous diary keeping to support his busy schedule of work to raise awareness of dementia issues. Keith, who sits on the IDEAL advisory board, said: “Having this large-scale, long-term research is so important to the future of dementia care. I’m really confident that it will produce some excellent information that will feed into people’s care plans when they get a diagnosis of dementia. The more we know about dementia, the better we can support people to live well with dementia.”