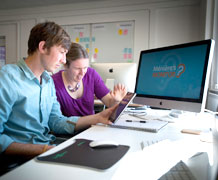 Free to download and use, the new version of the app is packed with updates.

Research into Ménière’s Disease is getting a big boost this week, with the release of a newly updated tool to record and analyse symptoms.

The Ménière’s Monitor allows users to collect information about their disease, helping them to manage their own condition as well as providing vital research data.

The project is being led by researchers at the University of Exeter Medical School and has already delivered unprecedented insights into the condition.

Analysis of data collected since 2014 has shown a possible link between atmospheric pressure and symptom severity, and suggested that patients are more than twice as likely to experience an attack if they have done something unusual.

Free to download and use, the new version of the app is packed with updates.

Users can now record information on stress and sleep, and input greater detail on the severity of their attacks. A login system will mean they can switch between devices to enter their information, on both mobile and desktop versions of the software.

Lead researcher, Dr Jessica Tyrrell, wants the app to continue to improve understanding of Ménière’s and is keen for as many people as possible to start using it.

“With over 2000 users across the World, the pilot version of Ménière’s Monitor was hugely successful,” said Dr Tyrrell. “We’d like to build on those numbers and collect even more data over the next 12 months, helping us gain a much better understanding of the condition, its symptoms and how to manage them.”

The team hope that the continued development of the Ménière’s Monitor could see it become an effective self-management tool, as well as a possible blueprint for other tools that could be used in similar conditions.

Integral to its development has been feedback and testing from users. Long term Ménière’s patient, Gerald Pitt, has been closely involved in the new release and said "The Ménière’s Monitor has transformed the way I manage my condition, allowing me to see patterns in my symptoms and take back control of my life. This new version of the app is really easy to use and it's fantastic to know that the data I'm collecting is also being used to improve our understanding of the disease.”

Full details of the study, information on how to take part, and both the mobile and desktop versions of Ménière’s Monitor are available at www.menieresmonitor.com.

New app will boost Ménière’s research from ECEHH on Vimeo.