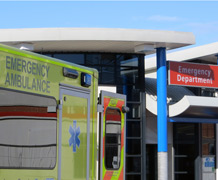 The ground-breaking project has led to a dramatic increase in the number of patients receiving vital clot-busting treatment. Image courtesy of Shutterstock

People who have had a stroke in Devon are receiving faster and more effective treatment thanks to research that has used the latest advances in computer simulation.

The ground-breaking project has led to a dramatic increase in the number of patients receiving vital clot-busting treatment, and significantly reduced treatment times.

Researchers from the NIHR CLAHRC South West Peninsula (PenCLAHRC) teamed up with the Royal Devon & Exeter Hospital and the South Western Ambulance Service NHS Foundation Trust to implement the study, which has highlighted the importance of speed when treating people with stroke.

For some patients whose stroke is due to a blood clot (known as ‘ischaemic stroke’), giving emergency treatment to break down the clot can limit brain damage and reduce the likelihood of disability.

To find ways to speed up this process, researchers created a detailed computer simulation of the path stroke patients follow in the hospital, replicating the journey from onset of the condition right through to the point of treatment.

They then used this model to identify and test possible improvements to the system, exploring a range of different scenarios. With several new initiatives established – such as paramedics calling stroke unit specialists ahead of their arrival – the team implemented their findings at the Royal Devon & Exeter Hospital.

The results of the project have been remarkable.

The number of people receiving clot-busting medication after a stroke has tripled, increasing from 4.7% (one in twenty) to 14% (one in seven), and the average time it takes to deliver the treatment has halved.

For over 600 people who are admitted with an acute stroke every year, the RD&E is now matching or beating the performance of the big urban stroke centres elsewhere in the UK and the world.

Dr Martin James, Lead Clinician for Stroke at the Royal Devon & Exeter Hospital, said: “Working out whether a person with stroke is suitable to receive clot-busting treatment can be complicated and time-consuming. We’ve been able to use the latest techniques in computer simulation to speed up this process, so no matter when a person suffers a stroke, day or night, weekday or weekend, we can provide the fastest possible assessment and treatment for them. The computer simulation project has really helped us to make vital changes to the care we give people with stroke in an emergency.”

The project has been so successful that it is now being rolled out to other acute hospitals across the South West in partnership with the South West Cardiovascular Strategic Clinical Network and the South West Academic Health Sciences Network.

Professor Martin Pitt, one of PenCLAHRC’s experts in operational modelling based at the University of Exeter Medical School, said: “This project represents a fantastic example of how modelling and simulation can be used to improve care for patients. We’re always looking for new projects to work on and would encourage colleagues working in the NHS across the South West to get in touch and explore the ways in which we might be able to help.”

Life Sciences Minister George Freeman MP said: “I am delighted to see the pioneering work of the National Institute for Health Research (NIHR) combine with our NHS to deliver faster, more effective treatment for stroke patients.

“This is truly twenty-first century technology, and the outstanding benefits for patients underline precisely why we invest £1 billion into NIHR health research each year.”