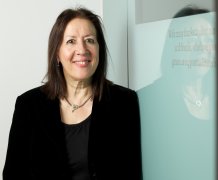 The University of Exeter’s Provost, Professor Janice Kay has been awarded a CBE.

The University of Exeter’s Provost, Professor Janice Kay, has been awarded a CBE for her services to higher education in the Queen’s New Year’s honours list.

Professor Kay constantly strives to improve the student experience, and has led on the issue for more than 14 years at the University of Exeter. In this time Exeter has become a sector leader in the student experience as recognised by consistent top rankings the National Student Experience Survey and a rise through the national league tables.

Professor Kay, Provost and Senior Deputy Vice-Chancellor at the University of Exeter, said: “I’m delighted and humbled by this award. I’m very proud of the University of Exeter’s commitment to putting students at the centre of everything we do. That approach has paid dividends – we’re at the forefront of the sector and a leader in terms of student satisfaction. It’s really rewarding to get such positive feedback from students, and it’s testimony to the hard work and dedication of a wide range of staff at Exeter.”

Professor Kay has pioneered new, integrated ways of working with students, such as the Change Agents programme. The programme enables student-led improvement projects and has been recognised nationally as a model of best practice. She introduced the Exeter Award which acknowledges the extra-curricular activities of students including volunteering and student-leadership which support personal growth and skills which are highly desired by employers.

The influence of Professor Kay’s commitment to students has been felt beyond Exeter in her many voluntary roles. For six years she chaired the 1994 Group Student Experience Policy Group which drove the national agenda defining the importance of the student experience and established an annual best-practice conference. She is currently Deputy Chair of the Higher Education Funding Council for England (HEFCE) Teaching Excellence Framework Panel, Deputy Chair of the Higher Education Academy and a member of the HEFCE Accountability and Regulation Strategic Advisory Committee. In these roles she advocates real and positive change for students.

Professor Kay is also recognised for her commitment to tackling inequality. She has played a critical role in establishing the Exeter Mathematics School; a collaborative community for gifted mathematicians which is one of only two in the country. The school has already facilitated student entry to the top universities in the country. She has contributed to the development of a new Education Campus at Cranbrook, Devon’s newest town, and was the Chair of the new South Devon University Technical College, which offers a new way of learning for 600 young people in the region. In addition, she is an influential figure in the regional health science and education community. She sits on the boards of the South West Academic Health Science Network and is a non-executive director of the Royal Devon and Exeter NHS Foundation Trust.

Professor Kay established herself in academia in the discipline of cognitive neuropsychology, studying the effects of brain damage, due to stroke, brain injury, tumours and disease, on perceptual, cognitive and motor skills. She developed a series of tests to enable comprehensive diagnostic testing of spoken and written language in the 1990s which continues to be used internationally as a research tool today.