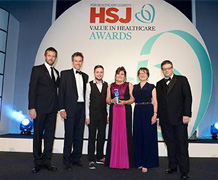 Medical School staff were involved in PenCLAHRC’s Patient-Initiated Clinic (PIC) project team who won at this year's Health Service Journal (HSJ) Value in Healthcare Awards, which took place in Manchester on 24th May 2016.

The HSJ awards seek to recognise and reward outstanding efficiency and improvement by the NHS, as well as the excellent use of resources. They also seek out examples of demonstrable improvement in outcomes, both within back office functions and clinical initiatives.

Having travelled to London earlier this year to present their case and explain why their project should win, the PIC team went on to scoop the award in the General Medicine category at the awards ceremony attended by over 900 of the who's who in healthcare.

Speaking on this achievement, project lead Dr Vicki Goodwin of the University of Exeter Medical School, said: Winning this award was a fantastic achievement for the PHNT Rheumatology team and PenCLAHRC. The patient-initiated follow-up service really is a person-centred service that ensures people are seen when they need to be and is something that could be done with other patient groups.”

The project was also named runner up for Best Practice at the British Society for Rheumatology (BSR) and Musculoskeletal Health Awards 2016, which took place earlier this year.

If you would like to find out more about the PIC project, you can visit our Exposure page for more information.

You can also watch a short video about the project below: