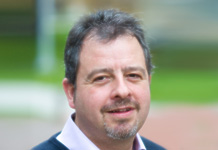 Professor Clive Ballard has been appointed as the new Executive Dean and Pro Vice-Chancellor of the University of Exeter Medical School.

Globally-renowned dementia and ageing expert Professor Clive Ballard is now in post as the new Dean and Pro-Vice Chancellor of the University of Exeter Medical School.

The Professor of Age-Related Diseases officially Exeter from King’s College London today. In his previous role, he was Director of the National Institute for Health Research (NIHR) Biomedical Research Unit for Dementia at the Institute of Psychiatry Psychology & Neuroscience (IoPPN) and South London and Maudsley NHS Foundation Trust, and Co-Director of the Wolfson Centre for Age Related Diseases at IoPPN. Earlier in his career, Clive served as Director of Research for the Alzheimer’s Society between 2003 and 2013 and has been actively involved in the development of policy and research on dementia in the UK as part of the advisory group for the Prime Minister’s challenge on dementia and the previous Ministerial Advisory group on dementia.

Clive said: "The University as a whole and the Medical School have had a fantastic trajectory of development. We have excellent medical students and a core of world class researchers. I look forward to being able to build on this excellent foundation to further improve the quality of everything we do, to build exciting local partnerships and to enhance our reputation worldwide as a world class university that delivers cutting edge research and teaching."

Alongside a high-profile background in developing strategy, Clive has a prolific research career. He has an extensive ongoing programme of research including key NIHR programmes focussing on improving the treatment and care for people with dementia living in care homes. He receives funding from the Medical Research Council, NIHR, the Wellcome Trust, industry and charities for clinical trials focussing on treatment of neuropsychiatric symptoms and therapies for people with early Alzheimer’s disease, and an extensive drug discovery programme in Alzheimer’s disease and Parkinson’s disease dementia. He has more than 500 research publications including more than 35 pivotal clinical trials and papers in Nature, New England Journal of Medicine and the Lancet. In 2015 Clive was elected as a Fellow of the Academy of Medical Sciences.

Clive will continue to collaborate actively with colleagues at King’s on specific projects. At Exeter, he will take over from Professor Angela Shore, who has been serving as Interim Dean and Pro-ViceChancellor for the past year, and today returns to her role as Vice-Dean Research for the Medical School.

Professor Sir Steve Smith, Executive Pro Vice Chancellor for the University of Exeter said: "I’m delighted to welcome Clive, who is a truly world-class researcher and strategist. He brings with him a wealth of invaluable experience in managing high-profile facilities with partnerships in the NHS and beyond both in the UK and across the globe. I’d like to thank Professor Angela Shore for her superb leadership over the past year. With such a fantastic top team, I look forward to seeing the Medical School go from strength to strength."

Professor Angela Shore said: “I’m really excited to welcome Clive, and look forward to working with him. He is an excellent appointment with a global reputation, and I have no doubt he will help our Medical School continue our trajectory of growth, alongside our commitment to outstanding quality in both education and research."