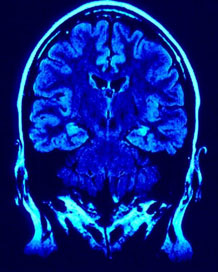 The new equipment will allow researchers to image cellular processes in the brain in greater detail than they’ve ever been able to before.

Dementia researchers at the University of Exeter have been awarded £91,500 to purchase a new high-powered laser to create a state-of-the-art microscope, transforming their ability to image the brain in minute detail.

The first of its kind in the region, the new equipment will benefit many research teams in Exeter, allowing them to image cellular processes in the brain in greater detail than they’ve ever been able to before. The award consists of £48,500 from the University of Exeter and £43,000 from Alzheimer’s Research UK.

Alzheimer’s Research UK is the UK’s leading dementia research charity, funding more than £33m of pioneering research into Alzheimer’s and other dementias. The charity relies entirely on donations to fund its research and supports a Network of over 1000 researchers across the UK, including Exeter which makes up Alzheimer’s Research UK’s South West Network Centre, alongside Plymouth University. The funding is one of a suite of new grants awarded by the charity to further its vision for a world free from the fear, harm and heartbreak of dementia.

The main purpose of nerve cells is to transmit signals, however in diseases such as Alzheimer’s, nerve cells lose this ability, leading to problems with memory and thinking. These changes in communication between nerve cells have traditionally been difficult for scientists to investigate. The development of sophisticated imaging technology has enabled scientists to look at tiny structures deep within the brain as they try to unravel how nerve cells are affected by the diseases that cause dementia.

The specialised ‘multiphoton’ laser will be used by researchers to excite fluorescent tags within cells and allow them to visualise particular proteins or processes inside cells. By using a different wavelength to normal microscopes, less damage is caused to surrounding cells, and the specialised laser produces higher resolution images than previously possible. The multiphoton microscope also allows scientists to observe processes in real-time rather than a single snapshot. Together, this means that researchers can visualise structures deeper into the tissue and in a very high level of detail, observing processes as they occur, to unlock the secrets of diseases like Alzheimer’s.

Professor Andrew Randall, at the University of Exeter Medical School, who secured the funding, said: “My research focuses on how nerve cells transmit signals and how their ability to do so is altered in diseases such as Alzheimer’s. With this new multiphoton laser, we will have a window deep into the brain, allowing us to see how signals are transmitted between nerve cells in real-time. This powerful new equipment will be a fantastic boost to the growing dementia research community in Exeter and will benefit scientists on a variety of research projects. I truly believe that research has the power to defeat dementia and I’m proud that teams here in Exeter are playing an important role in helping us reach that goal.”

Dr Laura Phipps of Alzheimer’s Research UK, said: “To undertake groundbreaking research, scientists need access to cutting-edge technologies that allow them to really scrutinise the cellular processes occurring in diseases such as Alzheimer’s. We are very glad to be able to support the important work of dementia researchers in Exeter, and we hope that this new equipment will support pioneering dementia research projects for many years to come.

“The devastating changes in memory and thinking that people with dementia experience are closely linked to alterations in communication between nerve cells. Due to the inaccessible nature of the brain, it has been difficult for scientists to study how signals are passed inside the brain, but this kind of cutting-edge technology is helping to make this a problem of the past. By understanding how communication between cells fails in Alzheimer’s, scientists can identify processes driving the disease that can take us one step closer to finding much-needed new treatments.”