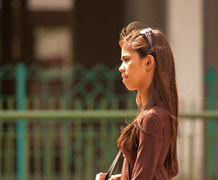 The study found that negative comments made by mothers had more impact on their children’s self-image. Image courtesy of Shutterstock

The first study to look at the influence of Asian parents on their young adult child’s body dissatisfaction levels and disordered eating in Singapore has found significant differences with Western culture, leading to calls for a tailored approach to treatment.

The study was carried out by a research collaboration between the University of Exeter Medical School, James Cook University, Singapore and the Australian National University. It found that negative comments made by mothers had more impact on their children’s self-image regardless of gender, in a culture where fathers are more authoritative and mothers more nurturing than in the West. This differs from Western studies in which comments made by mothers were more likely to influence daughters and fathers had more impact on sons.

The research, partially funded by the Singapore Children’s Society and published in the journal Body Image, comes against a backdrop of growing numbers of children developing eating disorders in the island nation, with figures now on a par with the UK. Although most prevalent in girls, a growing number of boys are being diagnosed with eating disorders. Currently, the Western approach to treatment is adopted in Singapore and across Asia. However, researchers argue that cultural differences mean that a more tailored approach is needed to educate parents and to treat young Asian people effectively.

The research team assessed questionnaire responses from 383 young adults, of whom 69 per cent were female. They looked at the impact of parental comments in relation to body weight, shape and eating habits.

Lead author Samuel Chng, a PhD student at the University of Exeter Medical School who is from Singapore, said more research was now needed to stop the problem spiralling further. He said: “Cultural family values are very different between Asia and the West, yet countries like Singapore have adopted Western strategies to this growing problem. In order for young people to get the best support and for health services to achieve value for money, more research is needed in this area to develop the best approach.”

Co-author Dr Daniel Fassnacht, at Australian National University, said: “In Singapore, negative parental comments on their child’s weight and shape were linked to greater body dissatisfaction and disordered eating. It is crucial to educate parents about the pervasive influence their negative comments have on their child’s eating behaviour.”

A spokesman for Singapore Children’s Society said: “Singapore Children’s Society offer research grants that support a range of graduate and undergraduate research relevant to better understanding the welfare of children and their families in Singapore. Having supported the earliest phase of Samuel Chng’s research, we are pleased that it has now been published and congratulate the author.”