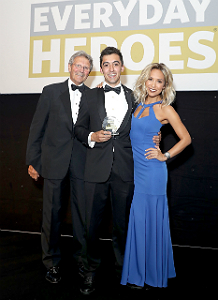 A medical student’s dedication and life-saving first aid skills have won him the St John’s Ambulance Volunteer of the Year award.

Luke Tester, a student at the University of Exeter Medical School, said he was “stunned” to win the award on Wednesday, in a ceremony hosted by Myleene Klass.

Luke, 22, was on the scene in seconds when a runner collapsed during a race last year.  He and another St John Ambulance colleague swiftly established that the runner was not breathing. They performed CPR with advanced resuscitation equipment and a defibrillator, reviving the man and caring for him until a paramedics arrived.

Luke, who is interested in a career as a doctor working in emergency medicine, said it was his first aid training that made the difference between life and death. He said: “The runner had no heartbeat and he wasn’t breathing. It was so fortunate for us to be in the right place at the right time, with the right training and equipment. It was really rewarding and moving to be able to make a difference.

“I’m a passionate believer in first  aid training and the value of St John Ambulance. I’m so proud to be a part of such an amazing organisation I’m incredibly honoured to receive this award. To say I’m over the moon would be an understatement.”

The accolade recognises Luke’s many roles with the charity, from providing first aid cover at events to responding to 999 calls and leading fundraising and awareness drives.

Luke said: “There are so many incredible volunteers within St John Ambulance. To have been nominated by them and voted as winner by my fellow volunteers is a real privilege – I was stunned when my name was read out.”

Luke, who was recently appointed to the voluntary role of the charity’s Regional Student Volunteering Officer said: “I could not be in this position without a huge number of people within St JohnAmbulance, so I would like to thank everyone that I’ve worked alongside over the last few years, and to those who nominated me for this fantastic award.”

Luke believes his experience of volunteering helped to prepare him for the demands of his medical studies. “I love my studies – the Medical School is fantastic and the clinical contact we have is exceptional. In some medical schools, you don’t get to interact with patients until the third or fourth years, but we were out on placements from week three. There’s a lot of crossover with my volunteering, in terms of the clinical side and the caring side of working with people and communicating. It’s a great combination."

Luke Tester was amongst 11 winners on the night, hosted by presenter and musician Myleene Klass, and supported by Laerdal Medical - creator of the world famous Resusci Anne.

During the awards ceremony, Luke was propelled to fame via social media as his family and friends bombarded Twitter with messages of support via #SJAheroes and dominated the event’s Tweet wall.

Their efforts – which included messages from the family’s animals – helped propel the hashtag into the UK’s top five most discussed topics of the evening, just behind the Great British Bake Off.

Sue Killen, CEO at St John Ambulance, said: ‘It’s right that we take the time to recognise these truly remarkable people on a national stage as their stories really show the difference first aid can make. They are an inspiration and should all be incredibly proud of their achievements”

The awards’ presenter, Myleene Klass said: "I feel very privileged to host the St John Ambulance Everyday Heroes awards - I know from personal experience how scary it is when you’re faced with a first aid emergency.

"My own daughter choked when she was just a baby, and I really believe because of the first aid training I'd had, I was able to save her life.‎

"First aid skills are so important and St John Ambulance has lots of free resources on their website to help you learn these life saving skills so please make the time to look, it could save a person’s life."

The awards were held at the five-star luxury hotel, the Grange St Paul’s, where guests were greeted with a drinks reception followed by a three course meal. The awards ceremony was followed by dancing. Read more on the awards on the charity’s website.