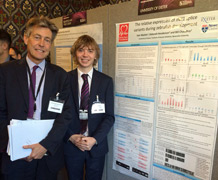 A University of Exeter Medical School student was invited to the Houses of Parliament to showcase his research as part of The British Conference of Undergraduate Research.

Sam Washer, 21, was welcomed by Labour MP Ben Bradshaw when he represented the University at the ‘Posters in Parliament’ event.

The undergraduate research chosen to present at the event was deemed as some of the best in the country. Sam, in his final year of the Medical Sciences programme, explained his research to MPs, Lords, Vice-Chancellors and some of the most prominent figures in Higher Education.

Congenital heart disease causes up to one-third of miscarriages within the first four months of pregnancy. At present, there is little information as to why this occurs.

Sam’s research was conducted while on his Professional Training Year (PTY) at Newcastle University. Exeter’s Medical Sciences students undertake PTY placements in a wide range of organisations, helping students to hone their skills in a working environment. Sam looked into a gene which resulted in heart abnormalities when removed from zebrafish. While on his PTY, he was tasked with finding out which of the products of this gene could be involved with heart development.

Sam, from Bridgwater in Somerset, said: “It was interesting to see such a variety of research carried out in the UK from all disciplines of academia, not only science. It was really useful to get some experience in talking about my research to those with no scientific background, as this will be an essential skill for the future.”

Ben Bradshaw, Labour MP for Exeter, said: “I was pleased to welcome Sam to Parliament to showcase his research into congenital heart defects. It’s always exciting to see the next generation of scientists emerging from Exeter, and from the quality of their research, the future looks bright.”

The British Conference of Undergraduate Research, which aims to promote undergraduates who have undertaken original research, was held this year at the Houses of Parliament on February 2.